Gardens do not come to mind with the Gold Rush.

San Francisco had men from all nationalities. There was a lot of crime and violence.

The streets were no more than mud tracks. No sooner was a house put up than it burned down.

Gardens do not fit the stereotype  –

but there were many of them.

But none were as beautiful as those of Sarah Gillespie! 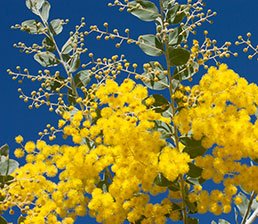 Tangible Memories: Californians and Their Gardens 1800-1950

who was much admired for her exotic flowers.

Sarah Gillespie Was An Expert Gardener

Once settled into their house on Chestnut Street she created a garden where she introduced new plants to California. Probably because she was a female, she is not famous today, but Mrs. Gillespie should be famous for her horticultural achievements. By 1853 she devoted a lot of time to her greenhouses which were built amazingly quickly – perhaps by her servants. She is said to have planted the first Australian acacias raised from seed in CA. 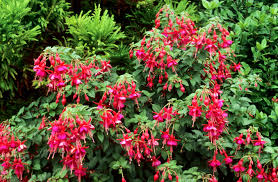 When a flower fair opened on October 7, 1853, she exhibited Passiflora alata – one of the passion flowers. The next year she showed 14 kinds of fuchsias, 14 geraniums, 10 calceolarias, 6 acacias, 2 camellias and many other ornamentals, numbering 108 kinds – more than anyone else at the show. All were exotic and imported from afar.

WHAT DID SARAH SAY ABOUT MRS. CHARLES GILLESPIE?

Sarah had met Mrs. Charles Gillespie and was familiar with her gardens

We passed some very pleasant places, none however to compare to Mrs. Charles Gillespie’s which looks in that sandy, barren soil like a little garden of Eden. We did not stop though. I should like much to have seen the garden and its universally admired mistress – not admired for the beauty of face and person so much, but for the lovely, admirable traits of mind and character. I believe her gentleman friends think there is not another lady to be compared with her in San Francisco. I hear her spoken of in the same manner in China, where she lived for some time and among her friends in New York. During our first visit to San Francisco we called out there to see Mrs. David Gillespie who was staying there then. The garden was beautiful and its natural advantages great. These have all been very much improved. We also saw Mrs. Charles Gillespie at that time and were very much pleased with her.

The Gillespie Family and Marie Seise –


The Gillespies are thought to have brought the first Chinese immigrants to America.

Mr. Charles Van Megen Gillespie was the first American to reside in the British Hong Kong. He owned a warehouse there built in 1842, where he traded wine, liquor, chandlery supplies, piece goods, building materials.

In Hong Kong his wife, Sarah Bentner Gillespie, hired a personal maid, who became known as Marie Seise  (no one seems to know her Chinese name – she was once married to a Portuguese sailor named Seise), with whom she became very close. When the Gillespie’s returned to the US on the Eagle on February 2, 1848, they brought Marie and 2 other male servants with them. These are thought to be the first Chinese immigrants.

Marie became not “a servant, but above a servant–rather as a companion–enjoying Sarah’s fullest confidence.” Marie learned English fluently, and the two were even confirmed together by Bishop Inghram at the first confirmation ceremony at San Francisco’s Trinity Episcopal Church in 1854. In the city, the Gillespies lived at Dupont and Clay Street. Marie worked for the Gillespie family for 30 years.

When they came from Hong Kong to San Francisco, Mr. Gillespie became a notary public and searcher of records, a real estate broker, and ran an importing firm for Chinese goods. He was the main person who examined wills.

His brother was Archibald Hamilton Gillespie who became famous in the Mexican American War.

The destroyer USS Gillespie was named for him as well as Gillespie Field airport in El Cajon, CA.

Go To Journal
Go To People
Go To San Francisco