The Howlands stayed with the Parkers when they were in Canton. 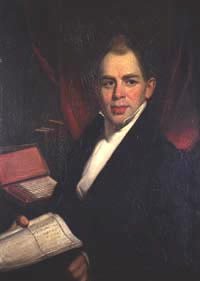 Peter Parker was born in Framingham, Massachusetts to a poor farming family.


When his father died and the farm was left to his sister and her husband, Peter was free to pursue an education.

where he obtained both medical and theological degrees. 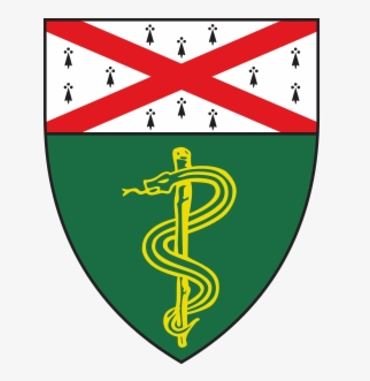 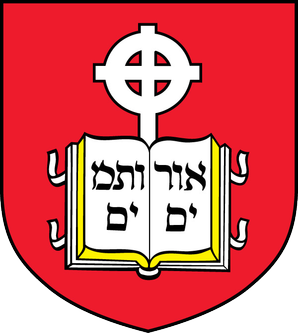 
In 1834 at the age of 30, Peter Parker became the first Protestant medical missionary to China.

He established the first hospital in China with the help of Howqua, a wealthy merchant and a good friend of Americans, who offered  free use of one of his big factories.

It was known as Canton Hospital and Parker Hospital.

At first he treated diseases of the eye, but later expanded his practice to many other maladies, mostly tumors.

He worked with the Chinese painter Lam Qua, who painted patients with various tumors to document their maladies.

Some of these are part of a collection of Lam Qua’s work held by the Peter Parker Collection at the Harvey Cushing/John Hay Whitney Medical Library at Yale University. 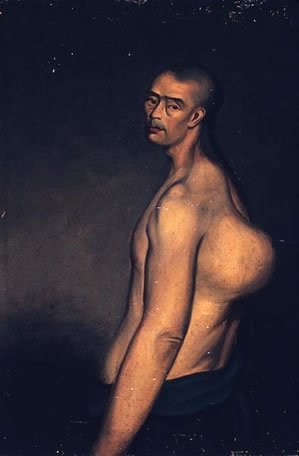 Return to the United States


In July 1840 the First Opium War broke out and Dr. Parker was forced to return to the United States.

He discovered that he was famous, receiving many invitations to speak in churches and to visit various dignitaries.

He was able to use his influence to urge the American government to establish diplomatic relations with China.

Parker met and married Harriet Webster, a relative of Daniel Webster. She was fifteen years younger than Peter.

The Parkers sailed for China in June 1842.

As the first Western woman to be permitted residence in China, the Chinese were extremely curious of Harriet. but she was accepted and loved, especially for her interest in children and their care.

WHAT WAS IT LIKE FOR HARRIET WHEN SHE ARRIVED IN CANTON?

Harriet Parker’s greatest desire was to set foot on land. She wanted to see the strange country that her husband loved and meet his Chinese friends. Her reception was completely different from that she expected. As she and her husband walked up the road from the Canton wharf, they were surrounded and all but overwhelmed by excited, pushing, shoving Chinese who were seeing an American woman for the first time. The crowd swarming around them commented on her long skirts and her hair style. Some wanted to touch her clothes. Others thought she would bring bad luck. Putting her between them, Dr. Parker and one of his Chinese doctors hustled her into the haven of the house. There she remained for weeks, going out only as far as her own terrace. Even so the curious took to rooftops and climbed trees to look at this strange creature. 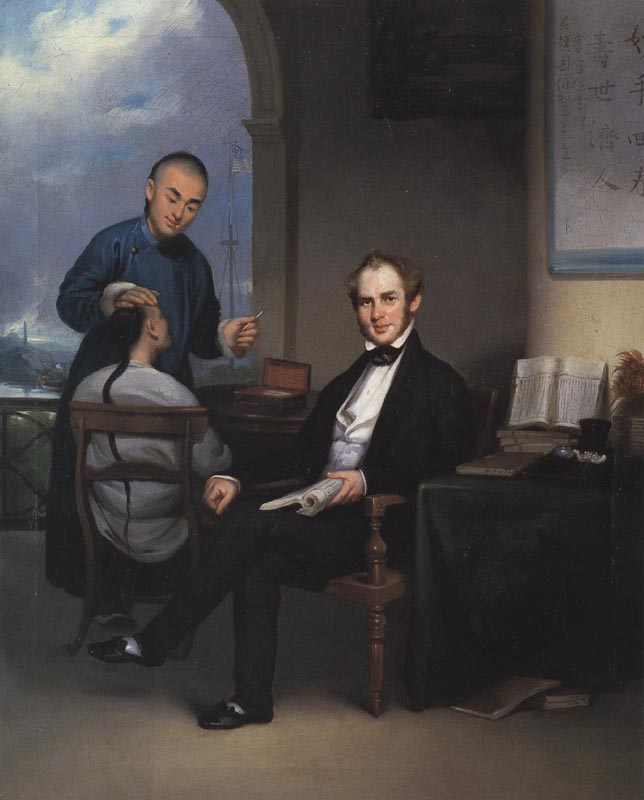 
Besides his surgery and hospital work, Dr. Parker was drawn into the service of the U.S. government.

His love for the Chinese people and their culture and his fluency in the language made him a useful bridge of understanding between the two countries.

He worked for the United States as an interpreter during Caleb Cushing’s negotiations of the Treaty of Wanghia.

At the beginning of the Taiping Rebellion he was on a mission from Shanghai to China when the steamer Larriston was involved in a shipwreck where 31 people died, but he survived.

At the time he was carrying some letters from Bayard Taylor for the New York Tribune; those letters went down with the ship.

Despite all his success, the American Board of Missions terminated their financial relationship with Parker because they felt he was spending too much time on his medical and diplomatic work, and not enough time on evangelism. 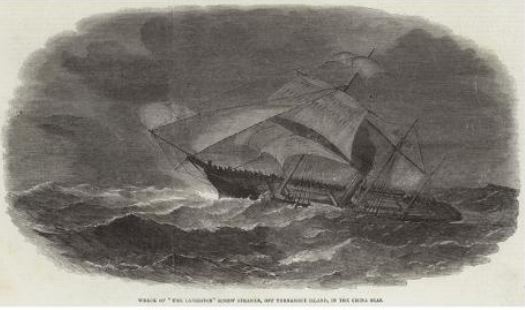 From the Life, Letters and Journals of the Rev. and Hon. Peter Parker George Barker Stevens, William Fisher Markwick 1896

Thanks unfeigned to my Almighty and most merciful Preserver, I am still in the land of the living, and now take up my pen to address you a brief note, informing you of the utter wreck of the steamer “Larriston” and the loss of thirty-one lives.

…about eleven PM…the “Larriston” at a speed of about ten knots, ran upon Turnabout Island (Chinese call it New Shan or Buffalo Island). I was upon deck, near the larboard gangway, when to my utter consternation, I saw the land immediately on our larboard bow. I gave the alarm, and the officer of the deck cried out “Port! Port!” but it was too late; she struck, stove in her bows, and the fore cabin filled with water and the fires were soon extinguished. The anchors were dropped, etc. It was blowing strong, and every surge sank her deeper in the water. The lifeboat was lowered…Mr. Jardine, Robertson and brother, D.D. Lewin and myself, of the passengers, and the second officer, one of the engineers, and some lascars manned her, and we made for the lee of the rock-bound island, uncertain whether the boat would survive the breakers for five minutes. With great difficulty, after several attempts, we succeeded in getting up the side of the rocks, as we supposed, to a point above high-water mark, and there held on till the light of day should enable us to find a place to ascend to the top, and the boat was sent back to the wreck, but after some hours of fruitless struggle against wind and waves, was compelled to return without reaching the steamer. In the meantime we heard human voices amid the surf. They came from the disabled boat, which had succeeded in reaching the shore, when she soon went to pieces, but most of those in her succeeded in gaining footing upon the rocks, among them our Chinese servants, but my poor old teacher was lost in landing. As daylight broke we succeeded in gaining the top of the island, and soon made for the part next to the wreck to see if aught of our companions remained. Fancy our feelings, for they cannot be well expressed, on seeing them still holding on to the part above water, the sea breaking over them and we utterly unable to help them. We waved our hands to them, wishing by signs to keep up their courage. About ten AM the wind subsided a little, and the tide having turned, we resolved to make one effort more to save them. With much difficulty we persuaded the only skiff of the island, which had but six inhabitants, to go out with our own boat to the wreck. To our great joy, we at length saw her reach so near that Captain Potter and Mr. Page, the first officer, with the help of a life buoy, swam off to her and were taken on board; the lifeboat also succeeded in taking a number more, and returned in time to take Captain Buglis and the remainder, and brought them safely to shore.

We subsisted upon the island for about forty-eight hours on dried sweet potatoes and a little salt fish. Fortunately there was fresh water.

In the afternoon of the third the little boat of the island was induced to take our Chinese carpenter, who spoke Hokien, on shore eight miles distant, with a message to the authorities to send us a conveyance to the island of Haeton and they were met by a piratical boat and robbed of their clothes and the little money we had sent to buy provisions with. Next day a small junk was sent, and with the aid of two fishing boats all were taken from the island.

The Portuguese lorcha No. 30 brought us safely here this morning. My hand is such that I fear you will find my writing almost illegible, and I will not add much more. How fortunate that Mrs. Parker was not with me, and that Mr. and Mrs. Smith did not take passage with us, for the children could scarcely have been saved! You can fancy my deep solicitude to reach my family in safety, and my deepest desire is that I may not forget while life lasts so impressive a lesson of human dependence and divine preservation, and may I be a better man the rest of my life.

before leaving for the return trip to New York.

WHAT DID SARAH WRITE ABOUT DR. PARKER?

We spent three most pleasant days and nights at the Doctor’s. The weather was most delightfully cool all the time we were there. A number of gentlemen called to see me, some old acquaintances, others I had never before seen. One evening while there, the Doctor and Mrs. Parker showed us many things that had been presented to them. There was a good deal of handsome silver medals, etc. One of the most interesting was a gold medal sent to the Doctor by the present Pope of Rome. The Doctor having most kindly delivered three of their Priests and Bishops from a Chinese prison. One of the Bishops was very ill at the time and the Doctor had him taken directly to his house where he soon died. The medal was accompanied by a very interesting letter. He also showed us a medal certifying that he was one of the contributors to the great Exhibition of 1851. 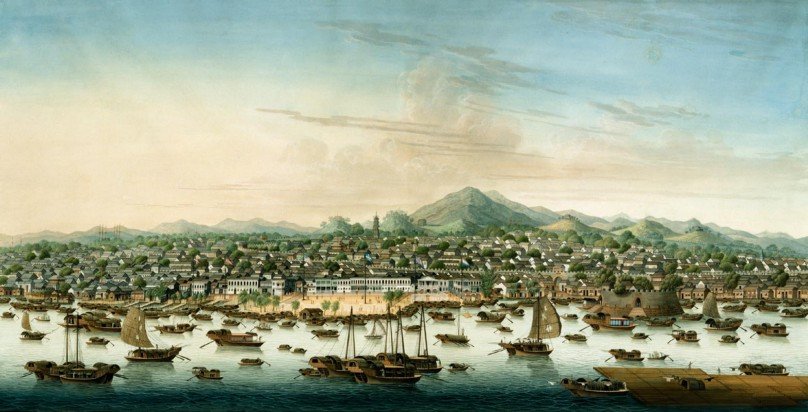 and was acquainted with him through their work for the United States government.

WHAT DID BAYARD TAYLOR WRITE ABOUT DR. PARKER?

From A Visit to India, Chiina and Japan in the Year 1853 by Bayard Taylor

I was much interested in a visit to Dr. Parker’s Chinese Hospital. Some idea of the good accomplished by this institution may be gathered from the fact, that since its establishment more than forty-nine thousand persons have been admitted. Dr. Parker himself is a very accomplished surgeon; his gallery of portraits exhibiting the tumors which he has removed, and the collection of stones which illustrates his skill in lithotomy, would be treasures to the Museum of a Medical College. His operations in lithotomy, especially, have been remarkably successful, as he has lost but four out of, I believe, thirty-two patients.


It is estimated that Peter Parker treated about 50,000 patients during his 23 years in China.


Dr. Parker and his wife returned to Washington and built a retirement house opposite the White House,

After 18 years of marriage, they had their first and only child, Peter Jr.

For 30 years the Parkers lived here, receiving notable and in­teresting visitors from around the world.

The American Board of Missions made their peace with him, making him a corporate member.


The Peter Parker Medal at Yale is named for this distinguished medical and divinity school alumnus. 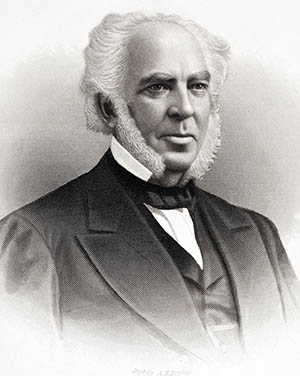