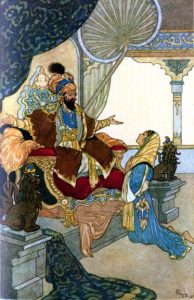 Cleaning seems to be quite the fashion at present. All things look beautifully clean on deck, having been freshly painted, even to the water casks. Yesterday and the day before the steward was regulating and cleaning his pantry. Today he has taken possession of the forward Cabin and is there performing the same kind of office. Until a few moments ago I was there writing for Williams. I could stand the steward scrubbing, but when it came to Mary’s ironing on the table, it was full time for me to retire. We have had fine weather for painting, the paint drying almost immediately.

Yesterday morning I spend in mending Willie’s toys and books and this proved no slight job. Our sailing for the last four days has not amounted to much, head winds, head currents, head sea. Four days ago we were eleven days ahead of last voyage but alas we have lost two days of that. The wind will take us west when our course is to go much more to the north than west. Our hopes and expectations were much raised, it is sad to have them thus disappointed. Today it is very mild and we have very little wind – so also was it yesterday. I am hoping from this some more propitious change. We have had a good many visitor birds for the last four days. They are a large dark brown bird and somewhat noisy. They seem very fond of floating on the water and we often have quite a number following us in this way. Their flight generally seems very low.

My birdie seems quite to enjoy this delightful change in the weather and is warbling stoutly this morning. I take the entire care of my bird – have done so for some time.

Williams has been reading the “Arabian Nights” for the last two or three days. He read two or three stories aloud to me and seems to find a re-perusal quite interesting. However, his cooler judgement is not a little shocked at the idea of placing them in children’s hands. I quite agree with him. In almost every story there is that which would make me shrink from reading or placing in either a son or daughter’s hands. I think I shall try the experiment of reading them myself to Willie when he is old enough and thus get the exceptional parts. I think I can manage to make it a treat for him to hear. As for myself, I have not read all these stories. When a child, my father, though he had the volumes, ever kept them locked up in his large lawyer’s writing desk. Never would allow me to read them. One volume I managed to borrow from a young school friend, the others I suppose she had not. That was the only one I read when a child. After my father’s death I happened one day when this desk was opened there lay the four little red volumes. I was eighteen then and supposing that no one would object, carried the volumes to my room. But I could not take pleasure or even interest in reading them. I suppose it was because they had been prohibited by a parent, dearly loved and now dead. I tried one or two and then gladly took them back to their long resting place in the desk, nor do I know whatever became of those what to me were once most mysterious volumes. Nor did I again ever touch the “Arabian Nights” till a few months before Willie was born. Being then at Portsmouth and having Frank and Horatia with me, I frequently read them a story. These volumes were Frank’s – new, bright red and full of illustrations. The charm was broken. They had not the forbidden effect of those very little dark red leather books. Even then I read on with little interest.

Seventy-two miles today, twenty-three to the North. I wish I could take more interest in writing my letters. All, and there are not a few, are written but two and these two ought certainly to be written and go with the rest from San Francisco. But it seems as if I could not possibly commence them. However, I must make a great effort, not today though.

Our little Willie has not been very well; his bowels somewhat disorderly. I think perhaps it is owing to his teeth, having four large ones to cut. Yesterday and today he seemed well.