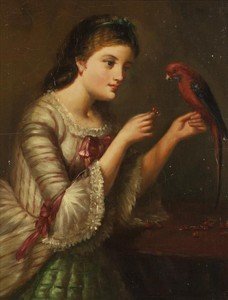 I don’t know what is the matter with Willie; he is so cross and fretful. I think most probably it is his teeth. He is not sick however and I know he should not be allowed thus to fret, but how to prevent it is the thing. The only trouble I ever have with Willie is this occasional fretting. I have had to punish him two or three times for it when I was as sure as I could be that he was perfectly well but at other times I try to shame him, laugh him or amuse him out of it. I am often very successful, but not today. I must try to be patient; it is seldom that I am troubled in this way.

Yesterday I came very near losing my beautiful little birdie. Through the carelessness of someone, his door was left unfastened and birdie made his escape to the deck, but fortunately Williams caught him. His music would indeed have been a loss. I love to stand by his cage and pick the meat from his seed and let him take it from my finger or lip. He does it as daintily and prettily as possible.

This morning I called Noah to say his lessons. He hesitated. I asked him if he did not know them and his answer was that he did not wish to learn anymore. I told him, very well, that of course I did not wish to force him. He is naturally very indolent but he has shown much more of it since last leaving New Jersey. He has learned his lesson or not as it suited him – always trying to excuse himself in some way. This has made me ask him once or twice lately if he did not wish to study. His answer has ever been, “oh yes”. It has provoked Williams and lately he has much wished me to give it up but when I once undertake a thing I cannot bear to give it up of myself. But now this is done, never to be resumed.