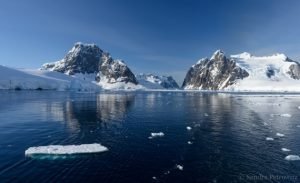 I do not mean to neglect thee my journal, but from one cause or another, days do pass and we hold no communion.

44 days, I think, from New York and Tierra Del Fuego has been in sight since early this morning. We are now quite near and I am in hopes we shall pass through the Straits of Le Maire before dark and then for a good wind to take us speedily around the Cape and far up the Pacific. This morning it was very clear and beautiful and the snow crowned hills looked beautiful in the sunlight but alas, it is cloudy this afternoon. Hope no storm is to fall to our portion in these parts; having just passed through some terribly rough weather and am somewhat tired of mountain waves. Sunday was a very rough day. Our ship, Williams says, tossed and twisted about – jumped and plunged more that day than she did the whole of the preceding voyage. It was also bad enough yesterday. Of course, poor me kept to the settee both days, feeling just sick enough to be most uncomfortable. However the days are nothing to the nights, for my little Willie cannot become accustomed to a rough sea at night, but is constantly waking and throwing himself about in all positions to find some one a little more comfortable than the last. Poor child, I do feel so sorry for him. He is sleepy as he can be, would sleep but cannot, and then the motion of the ship often suggests unpleasant dreams, and he wakes much frightened.

Mary has just come down with little Willie; she tells me it is snowing – delightful prospect. There seems to be much snow on the hills of the island; much more than I have ever seen before. Williams says that this no doubt is owing to the late storm, the effects of which we have just felt in the very rough sea. And this rough sea was all that fell to our portion, for both Sunday and yesterday were beautifully clear and bright, but I could not venture for a moment on deck, as all decks were constantly washed by the waves. All who had to be on deck were as much clothed in their rain clothes as if the rain was pouring from the clouds.

Sunday, as I was laying on the settee and Williams sitting by my side, we both were startled by an immense wave breaking over the quarter deck. In a moment we felt some of it pouring down in our Cabin close by my side, our skylights for some reason or other not being very tight this voyage. Such a thing never happened before. Williams went to the deck and very soon returned with the compass, the retreating wave having been so high as to fill and disarrange the compass. It certainly sounds as if much more damage had been done on deck, and my first thought was that one or both of the boats had been loosened from their moorings on deck.

I love not this rough weather. I enjoyed it the first voyage. The ten or twelve days we then had off of Cape Horn were very tempestuous, nothing like it have we since seen. It was one scene of exciting enjoyment to me and nothing delighted me more than to have Williams take me on deck when such a thing was possible. There, clinging to the ropes, I would enjoy the exciting, magnificent scene and when the waves would come striking against the prow or forward part of the ship and the spray would rise, curling up, and then dash over our vessel so that we would feel it even where we stood, I would exclaim to Williams “beautiful, oh, how beautiful”. But such feelings with Williams had then passed away and he sometimes would try to check my too evident delight. Then I could not understand him; now much better. He then thought of the great discomfort produced by such scenes to the many. This had taken place of the enjoyment he also took in these scenes at one time. This is now my third voyage round the world and I think with him, that storms and a rough sea are not desirable. Is this to be my last voyage or am I to visit these scenes again?