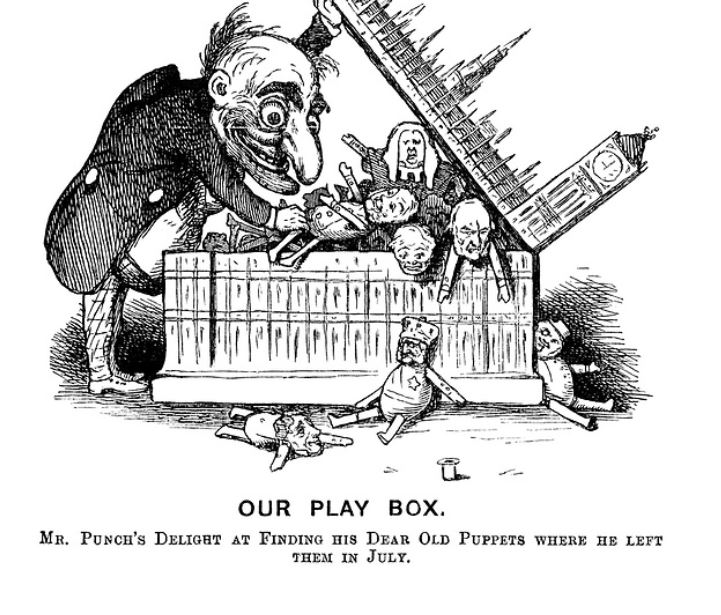 First day of Spring for home folks; with us, delightful warm weather. Today at twelve we have made two hundred and thirty miles. Our pleasant wind continues, and this morning we are going smoothly along at the rate of nine or ten knots.

My husband continues to improve much to my delight and walks quite like himself again. Cannot commence reading aloud yet, although he partly promised yesterday. He now says I must wait until he has finished his newspapers. Oh dear! I hope he is nearly at the end of them.

I have commenced Bulwer’s “King Arthur” today, in perfect despair of Williams ever getting through his papers. I want so much to read it, I cannot wait. I expected it would have been my first book after leaving but others have been before it. Tomorrow I must commence and read an hour or two in Gibbon. Must take the time for that when Willie sleeps.

I was much amused with Willie this morning. Before breakfast Willie, his father and myself were looking at a volume of Punch. Willie, who is quite at home with “Mr. Punch”, as he calls him, was pointing out the different personages, Duke of Wellington, Lord Brougham, Sir Robert Peel and etc. Soon his father was called on deck and Willie himself went into the Cabin where the young gentleman called for paper and pencil to make “old men” with. His wants being supplied, and he on my lap, commenced making his head, or as he calls them “old men”. He made several and then said, pointing to one with a famous nose, “Mama, that is the Duke of Wellington” – another Lord Brougham, another Sir Robert Peel, etc. Another of his favorite personages is Mr. Punch himself, and Willie at all times draws him well enough for anyone to recognize. This passion for drawing “old men” is very great. The consumption of paper, in consequence the same.

Willie has, indeed, a wonderful memory. Of this we have been aware for nearly a year but I never was more struck with it than this evening. As soon as the little fellow finished his tea came the usual request, “Mama show Willie book”. I read him a little hymn of five verses that I had read to him the night before, and then only once. After I had read it once this evening, Willie said, “Willie say it, Mama”. So, I read the first few words and the little kittie finished the line, and this he did in many places. After he has heard it two or three times more he will know it perfectly. Since leaving home I have given him among others a little book called “Nursery Rhymes”. He already knows some dozen of them by heart, and a good many others imperfectly. I never attempt to teach him anything and hope I shall never be induced to until he is certainly six years old. But it is his greatest amusement to have his books read to him and to hear them read for him to learn. Some months ago, Willie was particularly fond of looking at the pictures in an old school book of mine called “Lardner’s Outlines of History”. When he looked at the pictures he wanted to be told about them. It seemed foolish to tell him about Napoleon, Wellington, and Brutus, etc. but the child wanted it, and so we did. One day we found out what a retentive memory he had. He was sitting on my lap, looking at, and asking about, the pictures in the same book. The thought occurred to me to try and see if he remembered what I had told him about the several pictures. His father was sitting by and we were both so startled by the results, that a little fellow, not much more than two years old, should have his head filled not only with the contents of some dozen silly story books, but also with a partial of historical names and events, that we concluded to put the book away and say nothing more concerning it. It was done, and he has never seen it since. However, day before yesterday, I asked him a few questions to try how retentive his memory might be – the result was that every question was answered correctly, so I concluded to let the matter rest.