Being so far from home most people felt isolated and were anxious to hear any bit of news about their loved ones.

This came in the way of “Letters from Home”. 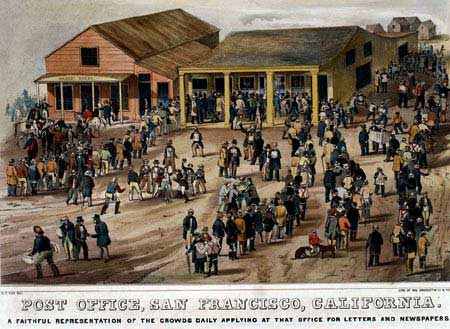 How did the mail get to San Francisco?


In 1853 the only official mail came to California by sea.

Other areas of the country used stagecoaches on “post roads”.

WHEN DID THE OVERLAND MAIL START TO COME TO CALIFORNIA?

Butterfield’s Overland Stagecoach Route to California did not start until 1857.

WHEN DID THE PONY EXPRESS START?

The Pacific Mail Steamship Company had a contract with the Post Office Department to transport mail to California. They did this by way of the Panama Route. 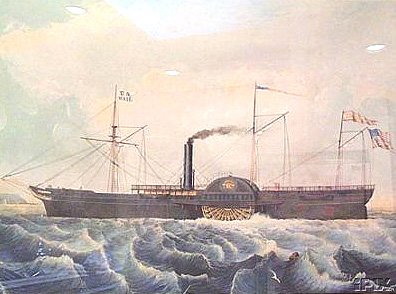 This company was started by William H. Aspinwall and other New York merchants including G.G. Howland and S.S. Howland, distant relatives of Williams. 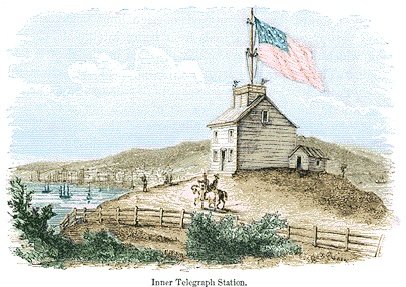 In 1846, when Captain John Montgomery of the USS Portsmouth claimed San Francisco for the United States,

he called for a defensive structure to be built on Telegraph Hill (then known as Loma Alta or Prospect Hill).

It was also a lookout point for ships entering the Golden Gate.

There was a mechanical device with arms that acted as semaphores to signal the type of ship that was entering the bay.

Merchants, financiers, speculators and others used the information to determine when to meet the ship at the dock as soon as it arrived.

If it was a “Side-Wheel Steamer” they knew there would be “Letters from Home”!

WHAT FUNNY THING HAPPENED DURING A PERFORMANCE OF “THE HUNCHBACK”?

An amusing incident occurred in the gold rush days at San Francisco’s American Theater, during a performance of James Sheridan Knowles’s 1832 comedy, The Hunchback.

“The play had progressed to where ‘Julia’ has quarreled with ‘Clifford,’ and ‘Master Walter,’ just hearing of it, comes in, all excitement, and walks to the centre of the stage.

“The actor’s figure, dressed entirely in black, stood in bold relief against the white, flower-spotted scenery representing the drawing-room walls.

“Throwing up his arms, long and black, he exclaimed, ‘What does this mean?’

‘Side-wheel steamer!,’ roared an immense voice from the audience.

“The effect was electrical. Shouts of laughter and round upon round of applause interrupted the play for some minutes.”

All the business men and many of the women and children were familiar with the signs…. When the telegraph signalled a side-wheeler, about the time when the Panama steamer was due, the city fluttered with excitement, and thousands of men rushed to see friends, to hear the news, and to look after letters. The moment after the steamer reached the dock the streets were full of boys crying the New York papers, the sale of which was a source of large revenue to the newsmen.

In those days, before the recent improvements in the delivery of letters, the Post Office exhibited the most curious scenes on the arrival of the mails from the Atlantic States. People crowded by hundreds into the long lines to march to the windows in quest of letters from home. Desperate efforts were made to secure a place near the window, in anticipation of the opening of the office. Men rose from their beds in the middle of the night for this purpose. It was a common practice to provide a chair, and hitch up, step by step, as the procession slowly advanced, and to while away the time, with cigars and other appliances. Persons were exposed for hours to the most drenching rains, which they bore with heroic fortitude, rather than relinquish their post. Men of speculative views who expected no letters, secured advanced places, and then sold them, sometimes for as much as eight or ten dollars.