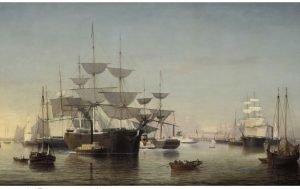 The last journal entry is by Bayard Taylor…

We had a tedious night, of alternate calms and snow-squalls,
and I slept very little, out of anxiety lest a stiff nor’wester
should spring up and blow us out to sea again. But by morning
we had a pilot aboard, and taking advantage of a shift of
the wind, made a tack which brought us in sight of Sandy
Hook and of two steam-tugs. At ten o’clock the Leviathan
had grappled us; the useless sails were furled, and we sped
surely and swiftly, in the clear winter sunshine, up the outer
bay, through the Narrows and into the noble harbor of New
York. The hills of Staten Island glittered with snow; the
trees had long been bare and the grass dead; and for the “first
time in nearly three years, I looked upon a winter landscape.
It was the 20th of December, and 101 days since our departure
from Whampoa. We rapidly approached the familiar and
beloved city, and at 2 P. M. I landed on one of the East River
piers.