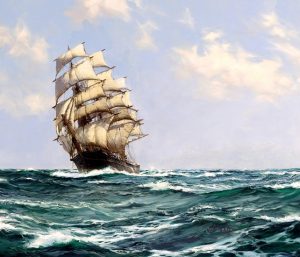 We have a fine wind and are going twelve knots an hour, have for the last sixteen hours. The air feels cool and delightful.

Willie’s forehead quite troubles me. That is not a boil what he has. It is an ugly looking thing, large of the deepest red and feels rather soft to the touch. The outside skin seems to be constantly drying and peeling off. Williams says that it is a bunion, and that it will in time pass away. I trust that it will shortly and leave no mark on his beautiful white brow. From present appearances, that looks almost impossible. There is another coming. I trust it will be nothing more than a little boil like the first. Dear child, it is sad to see his sweet face so badly disfigured – but it is far too rough to write today. 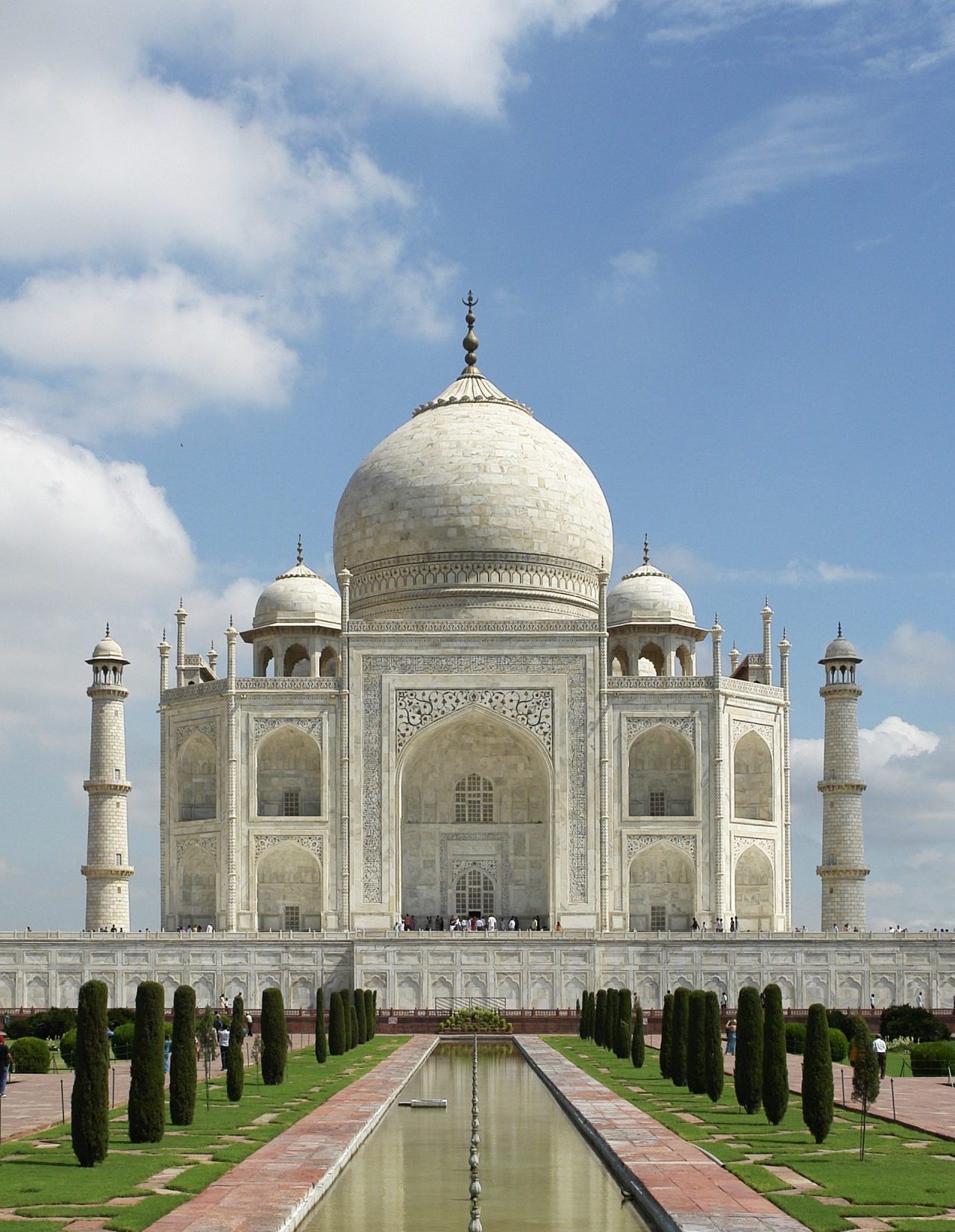 Our wind continues today, made 260 miles. This morning spoke to Mary about something I did not like and she answered very rudely. She has not been at all pleasant lately, that is, toward me. She acts as if she could not bear to be spoken to about anything, and I am sure I hate to have to do it but she is so negligent and slighting at times that I have had to do it two or three times and then she looks and acts as if a dreadful injury had been done her. I am very sorry that this should be so as I like her very much and it is very unpleasant to have anything to do with a person that looks as sour as she does at present, but when I see things I do not like done again and again I will speak and try and correct her. Her greatest fault is forgetfulness, that is, I hope so, and that she is not willful in her omissions and commissions. I would mind this comparatively little if she could but be pleasant when I remind her of anything neglected.

Yesterday and today read considerable in my history of India. The proceedings of the company in India are really sickening; the poor natives had a hard time of it indeed; for the largest number of the Company’s servants, from the Gov. General down, seemed to think that their chief business was to enrich themselves and they did do it in all sorts of ways. Dishonorable and untruthful conduct was of no account in their dealings with the natives.

Japan: An Account Geographical and Historical by Charles MacFarlane
Commodore Perry and the Expedition to Japan

A lovely cool day with a wind carrying us about ten knots an hour.

It is the Sabbath. Williams has been reading the morning service and some chapters.

Had a pleasant little chat this morning with Mr. Cornell our 2nd Mate. It arose from my borrowing his drawing pencils. Our chat was on the subject of drawing and painting. We discussed some fine paintings that we had both seen. Mr. Cornell draws very well himself, says he likes to design better than copying or sketching anything particular from nature. He told me that he thought it required greater talents to produce a fine painting or rather perhaps series of paintings than to write a fine book.

The other evening had a long pleasant conversation of nearly three hours with Mr. Contee; it was almost entirely about the Japanese expedition. Speaking of the appearance of the town of Soo Chow that they visited, he said that, that part occupied by the wealthy class was most exclusively built; high walls of stone on either side of the street prevent a passenger from seeing more than just the upper part of the houses. The houses have a small courtyard in front and a large yard in back. It gives the town, of course, a peculiar appearance. He said some of the villages just across the river looked very pleasant, the streets lined with fine trees. Here the officers often walked, and would sometimes stroll into the houses, but it made a terrible commotion among the women-kind who would run, leaving houses and everything else at the mercy of the newcomer. The market women would even run and leave their goods. However, after awhile they became accustomed to the foreigners and let them go and come as they chose.

Everyone I have heard speak of the Soo Chow Islands says they are very beautiful. Mr. Taylor was among their number sent by the Commodore. On the island, or islands, in their wanderings they discovered the ruins of a large stone castle situated on a hill, and surrounded by a dense forest. On their return inquiries were made regarding it. No one knew anything about it from the Governor down. It was really a relic of former ages.

When the Expedition arrived in the Bay of Jeddo they were, as is usual with the Japan fashion, met by a large number of boats, their object to warn them away immediately. And although they had never seen a steamboat before, they would come dashing up in front of them, utterly regardless of danger and catch hold of anything they could lay their hands on. They were threatened and ordered off and the ropes to which they clung were cut away. Mr. Contee said that when they found there was no use in trying to stop farther progress of the ships (four altogether, two being steamers), some of them actually gnashed their teeth with rage. When the ships came to anchor as usual, they completely surrounded them with multitudes of their boats. The Commodore ordered Mr. Contee to speak with the chief officer of these boats. He told him that the boats must take their departure; that they would not be thus surrounded. The officer replied that it was a Japanese custom; they always did this to a strange vessel. Mr. Contee said that they also had a custom, and that was never to allow themselves to be thus surrounded. They said that their Sovereign ordered it. He said that it was an insult offered to his Sovereign and that if he did not disperse them in fifteen minutes they would fire into and sink them all. Mr. Contee then turned his direction to the telegraphic signs that had just been run up at masthead and told him that was the signal to the other ships to fire in case their boats should remain at the expiration of the fifteen minutes. It was concluded best to disperse. Mr. Contee said it was done in a quiet fearless manner and in perfect order – all give the Japanese credit for being a brave, fearless set.

After this point was settled, the next was with whom the commodore was to confer and deliver his letters. They wished him to go and deliver their letters to the Dutch Company there, to be forwarded by them to the government. That the Commodore would not for a moment hear of. He came as Ambassador from his Sovereign to theirs, and he only could deliver his business to an officer of high rank. This put them in great trouble. It was entirely against their custom. But the Commodore was firm and determined and if they did not agree to his terms, he would storm their City. They finally agreed, and the two highest Princes in the Empire with a large train were sent to receive him. Truly this was a wonderful concession for the proud Empire.

They came to that part of the Bay seven miles from Jeddo, where the ships were stationed. The Commodore with officers and men amounting to altogether 100 went on shore. They were met by an immense Company. The Princes themselves were in their tent thither. The Commodore and his officers proceeded. The Commodore had two letters; one the letter from the President to the Emperor; the other the Commodore’s credentials. Mr. Contee said the letters were done up beautifully, tied with ribbon and to one end of each was our Government Seal. They were each deposited in beautiful solid gold boxes, exquisitely carved and each of these boxes with the pendant seal were deposited in very beautiful rosewood boxes having gold hinges, gold locks and keys. They remained on shore an hour.

The Japanese are a fine looking set of men and very intelligent. Speaking of their armor, Mr. Contee mentioned their swords; said they were the most tempered in the world; would cut ours to pieces. He also spoke of a singular custom that they have. It is holding long strips of cotton cloth before their soldiers; this cotton has printed on it the various arms of the different leaders, each leader having his own strip. The upper edge of the cloth is fastened at every little distance to a rod which is held by a man. If there is any wind the cloth is constantly fluttering in the breeze. Mr. Contee says the effect is very pretty. The heads of the soldiers are seen above the strip. In battle this fashion prevents an enemy from estimating the number of his opponents a few may have the appearance of many. These strips are usually three tiers deep. It is also used in the defense of their forts.

The Commodore was in the Bay of Jeddo a number of days. They were constantly visited by Japanese of the higher ranks. They were delighted to have the machinery of the steamships explained to them. When the Commodore left the Bay, he invited those members of the deputation and others that would like to accompany them out of the Bay. A large party went and were delighted, returning in their several boats which had followed them. Before they left, the Commodore and officers told them that they hoped on their next visit to see something of their ladies; that they hoped to give a Ball to them on board. This, Mr. Contee said, seemed to please and delight them very much. The Commodore told them about the present he had bought for the Emperor (a magnetic telegraph); he takes it with him next Spring on his return. They were very anxious to see it.

The Commodore was constantly sending out parties to survey the Bay. One boat went a short distance up one of the creeks or rivers there on the banks; they saw a number of women, some with babies in their arms. They showed no fear whatever of the strangers, but came close down to the banks and spoke to them. I should like much to see some of the ladies of Japan. If all accounts of them are correct, MacFarlane in his work speaks in the highest terms of them. They are intelligent and highly educated; their manners most refined and exceedingly graceful. Those who have seen and become acquainted with them say they would grace the most polished court in Europe.