Evening, still at San Francisco, though at anchor in the Bay. Expecting us to leave the wharf at five this morning and be towed quite out to sea by the steamer, our friends, Mr. Minturn, Morgan and Hathaway, made their appearance on board very early to accompany us out and return by the steamer but owing to mismanagement on the part of the pilot in not calculating the time of the return tide, we could not even leave the wharf till nine o’clock. The little steamer made several efforts to haul us off but to no purpose, so strong was the tide. At nine it changed so we managed to get out in the Bay but the opportunity for clearing the harbor was past. Our friends returned about ten in the steamer. I felt sad to bid them farewell. We shall leave tomorrow quite early, the steamer taking us quite out to sea. I am glad we do not start our voyage until tomorrow. I like not leaving port on the Sabbath. I do not think we should have gained anything, I verily believe we should have lost – no good attends on Sabbath breaking. I only wish from my very heart that we could have gotten in the stream last evening or yesterday afternoon instead of doing it this morning.

This morning we parted with our steward, he also returning in the steamboat. I felt very sorry to have him go and he seemed very sorry to go. Our new one has been with us for the last two days. He looks and appears to be very pleasant. Williams thinks we shall like him. I hope we shall.

Williams has been sitting opposite me all the evening writing most briskly, but one of our Cabin passengers made his appearance this morning. His name Turnbull and to say the least, a most uninteresting looking man. He seems most bashful and particularly quiet. Why did he not choose the “Sword-fish” instead or the “Star of the Union”. Time will develop him I suppose. That is if there is any developing about him. 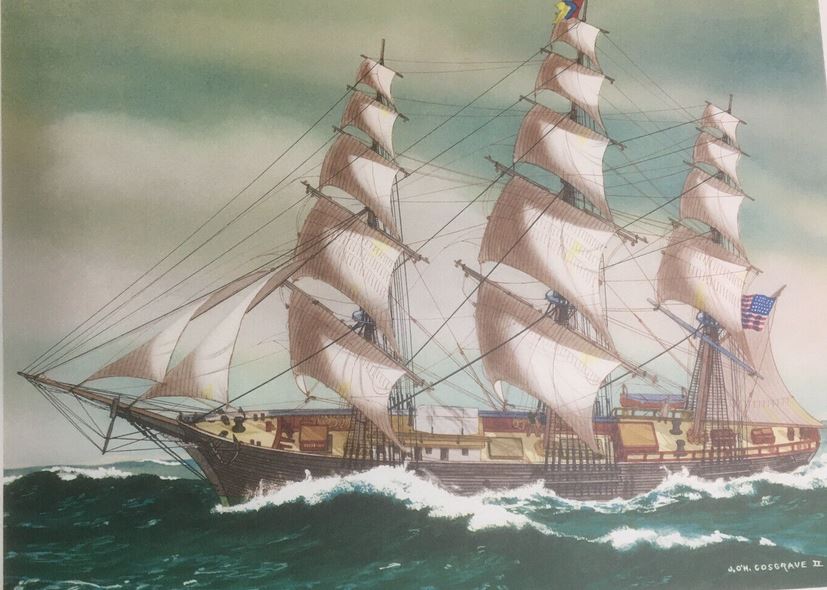 Again we are sailing on the ocean with nothing but blue water to be seen. Our first port, we expect, will be Hongkong. We got under way a little after six yesterday morning, the steamboat towing us out of the Bay. We had expected it would have taken us much further out, but the poor little thing had not power to draw us, so Williams might as well have kept the money he paid for her services yesterday. That, together with hauling us from the dock the day before cost $450. She left us soon, but the pilot remained until twenty minutes past eleven. It was very foggy, had been so all the morning and the wind very light, but in about an hour the wind took us and we have gone on our way very well ever since. It will soon be time for Williams to make his observation. I quite want to know how far distant we are from San Francisco and friends.

I was on deck most of the time yesterday morning. A ship just going to sea presents a busy scene. Orders shouted as if life itself depended upon them and obeyed apparently in the same spirit. Williams looks and acts all excitement. When the pilot goes it looks indeed like going to sea. After Williams has taken leave of these kind of folks, he gives a sort of shake, and his look says “now I have my own again”. His orders are given, soon executed and our own ship, again shooting over the waters. Yesterday, seeing this all done he came to the Cabin “well that business is all done and over with”. He certainly looked relieved and fine. Thus far our voyage has been most successful and satisfactory to all concerned. The reputation of our ship is, and has ever been, most excellent. May her prospects in China prove brilliant and in her voyage home may she surpass all others.

Yesterday saw but one or two of our Chinese passengers on deck. It was rather rough and I suppose they were glad to remain below. No doubt we shall see plenty of them ere the voyage is over.

Dear little Willie seems very contented about going to sea again. He has been a dear good little darling. He remembers his visit to China and seems very much pleased with the idea of going again. His gums certainly trouble him though they do not make him sick in any way. I expect he will miss little Charlie very much. I am sorry that he has no child to play with but cannot say I am at all sorry that Charlie has gone. He was not a good boy and consequently no good companion for Willis. I found it necessary to keep the watch over him whenever he was with Willie. Children are great imitators and Charlie being a number of years older, Willie seemed to think him very smart and very wise and, of course, whatever Charlie did or said he wanted to do the same.

Avah, my Chinese boy, also remained at San Francisco. We got him an excellent place in Macondray’s family. I hope and think he will do well.

Besides all the books Mr. Morgan bestowed upon us we are indebted to him for a large bundle of newspapers – principally the New Bedford Mercury. I think it about the best paper I’ve ever read – full of good readable matter. Spent last evening and two or three hours this morning in reading them. So good were they that I read about everything. Last evening read the account of the destruction of an English ship, the “Commander”, Captain Candy, his wife, servants and officers all murdered by the crew who were composed of Jayenses and Maylays. She was on her way from China. As I was about to go to bed the story recurred to me and other stories of Chinese-like deeds. I felt not a little nervous when I thought of our 150 Chinese and could not help whispering my fears to Williams. He assured me I had nothing to fear and tried to dissipate my uneasiness but I almost feared to sleep. However, I slept, and woke this morning well and fresh with no recollection of bad dreams.

220 miles from San Francisco. Now I must attend to my flowers. Mr. Morgan gave us five beautiful bouquets Saturday evening, and I shall keep them as long as possible. It is so pleasant to have flowers at sea. 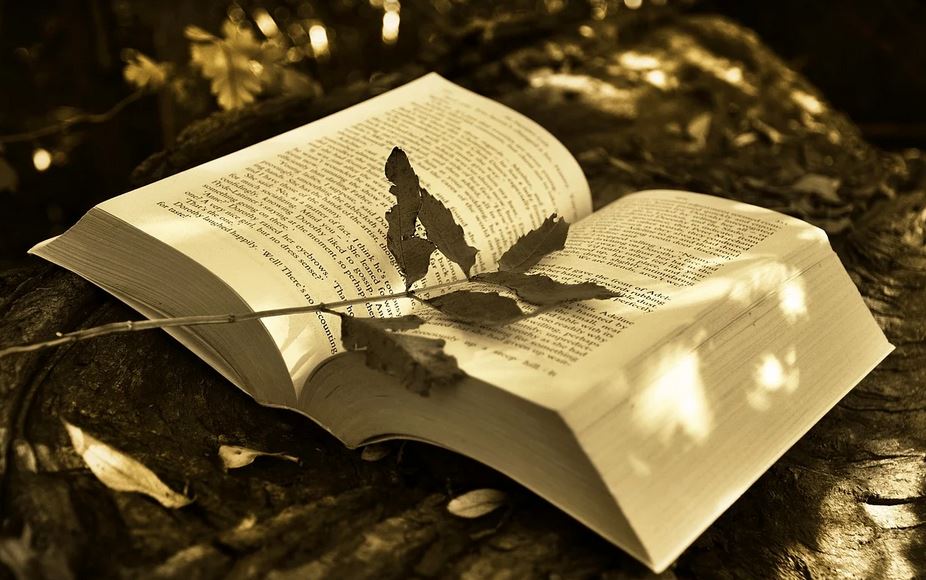 The Night-Side of Nature by Catherine Crowe

Our run yesterday was very good – 252 miles. I rather think it will not be as well today. Evening before last Williams commenced reading again our book “Thorpe” by William Mountford. He is an English Unitarian Minister who has been in the United States the last three or four years. I believe he is now settled somewhere in the neighborhood of Boston. I have read several of his works and like them very much. They are beautifully written. Judging from his works I should think him a pious, excellent man with large and liberal views. Last night I commenced to myself a book called “The Night-Side of Nature” by Catherine Crowe. It treats of dreams, illusions, ghosts and all sorts of night things. I have no doubt it will make me quake, and fear to look about in the dark. I told Mr. Morgan, by whom also “Thorpe” was lent us, that I feared to read it and that I should leave it alone. But lo and behold it is the very first book I take up. It looks terribly interesting. I could not help my eye glancing over a page here and there.

Yesterday, soon after breakfast, I took up Gibbon again, also this morning, read altogether about fifty pages. I shall endeavor to read fifteen to twenty pages every day. Williams did not read aloud last night, his ear feeling quite stiff, but it feels better today. I hope it will soon get entirely well.

Williams has just taken his observation, the result 227 miles. Our new steward seems to do very well. He is polite, pleasant and obliging and his table very good. If he goes on as well we shall not much feel the loss of our old steward. Our stove, that used to be so much trouble, has for a long time acted as well as we could wish. Use has made our cook, whom we retained, quite familiar with it and what most particularly reformed it – all the condensing operations were long ago put an end to.

Our little Willie gets along very well and happily – is good, from morning to night – his gums seem much better. I don’t know what made the little fellow do it, but while at San Francisco he used to scream every day while taking his bath from the very beginning to the end of it. It was terrible and rightly made me feel very unhappy. He had ever before enjoyed and delighted in his bath. I could not understand it. I begged him again and again to tell me why he cried but never a word could I get from him. But from the very day we left he has enjoyed his bath as much as ever. These little creatures are rightly queer sometimes. I wish they were more ready to give a reason for their queerness.

Our Chinese passengers are very quiet. Seem very much pleased with all things around them. Yesterday they had several gambling parties on deck. Willie and his playthings attract much of their attention. I suppose they never saw anything of the kind before. Yesterday Willie took his little white lap dog on deck. It is quite large and a very pretty plaything. The Chinese were highly delighted and amused as Willie draws it along the deck and when he made it bark Mary said they fairly screamed with laughter.