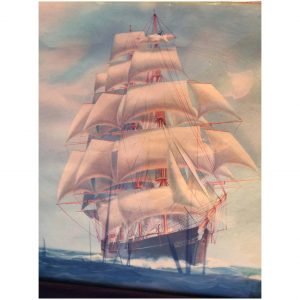 Have had a fine day – this evening however is rather stormy; have had to take in much sail. There has been a favorable change in the wind today, we have had the studding sails set. It was a welcome sight – it having been long since our eyes had rested on them. This morning the wind was very light, this afternoon it increased to about sixty knots, quite wonderful for us who have just crept along for the last fortnight.

Three vessels have been in sight today, two of them Brigs, these we passed long ago The other is a large ship; Williams thinks a Clipper. Ever since she made her appearance, which was about one o’clock this morning, we have been gaining on slowly but constantly, at last as we were approaching quite near, a fog shut her out from sight. Late this afternoon – if our wind continues I doubt if we see her tomorrow.

Williams’ ear feels better today, for that I am most thankful. There has been a wonderful improvement in Colin Campbell today. For the last two weeks or more, the boy has kept his bed, complaining very much. No longer ago than yesterday I could not persuade him to sit for a few moments in a chair. So, he could not possibly – even to raise his head made all things turn dark before his eyes. This morning on coming out in the Cabin I found the young gentleman in the forward Cabin sitting very composedly on one of the chairs – I was surprised enough. He told me he felt a great deal better – all his pains were going. It has been his endeavor to appear as well as possible today. He has been up all day on deck, four or five times and walking about as well as he did before this last month or more’s sickness. I do not understand it, he has constantly some new idea in his head. The child is delicate and very much out of health, that is most evident but for some cause or other he at times effects illness when it is most evident to all. I feel assured now that much of his last illness was affected. I do not understand this boy – it makes me feel sad to see one so young, so very deceitful. 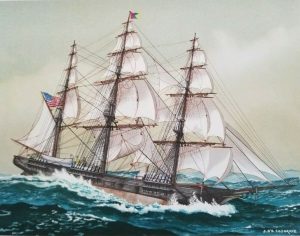 The vessels of yesterday have disappeared but another ship is in sight some distance to our left. We have gained on her very much this morning. We are now sailing to the northeast by east, sailed this direction through the night. This morning for a few hours we sailed to the westward. I hope the wind will now prove more steady. If so, we must very soon reach port.

This morning Williams read as usual the morning services and several chapters from Job. How lofty is the tone of some of those chapters – quite sublime. Williams’ ear continues better. If he does not take cold in it, it will probably be well in two or three days. Colin continues most surprisingly well. Was up and on deck before I left my room this morning. Willie for a wonder got up wrong this morning. I trust he will wake from his morning nap in a more happy frame of mind. Today, thus far, he has been somewhat like an April day, showers of tears followed by bright sunshine, but it is seldom the little kittie is thus. It is perfectly astonishing how so young a child loves to be read to and talked with. He is ever ready to listen and gives you his undivided attention and his memory retains just about everything he hears. It is my intention to regularly teach Willie till he is full six years old. As it is, he learns of his own accord more than I care to have him.

Williams has just taken his observation – 113 miles directly on our way. If the wind continues three easy days sail will take us into port. The ship in sight this morning proved to be the “Independence”, one of Mr. Hathaway’s ships from New York bound to San Francisco. She sailed from New York before we arrived there from China – a terribly long voyage and yet Williams tells me that for a long time she was the fastest and finest ship sailing out of New York Harbor. We passed her very close and like a streak. 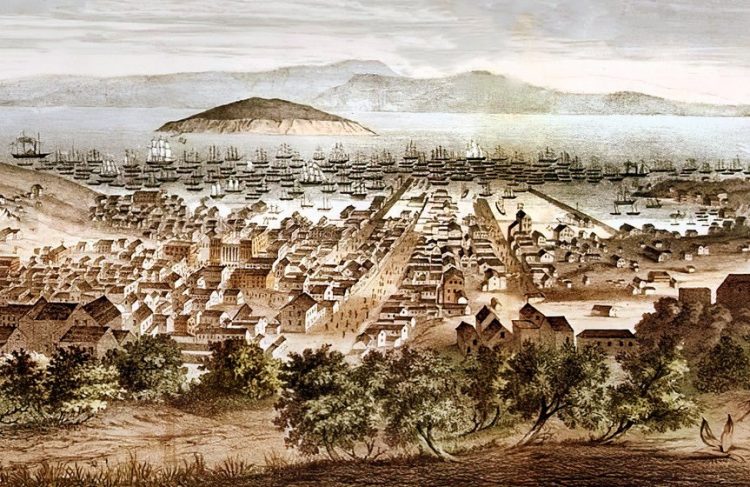 A two good days sail brought us here yesterday morning, June 1st. Our long desired and most welcome letters were placed in our hands as soon as we touched the dock (this time we are at “Long Wharf”) by our good friend Mr. Morgan who was most glad to see us as I am sure we were him. He looks exactly the same as ever. He was soon followed by Mr. Renford, then came Mr. Gillespie. The two first of these gentlemen remained the day with us and after tea we were joined by Mr. Minturn and a Mr. Hathaway, one whom I had never seen before. All seemed truly glad to see us. Willie was quite friendly, more so than I expected he would be.

Our letters from home were delightful, nothing therein to make us feel in the least sad – all well. As for Molly, I think she appears to enjoy herself very well – not once admitted a wish to be back on board of the “Serpent”. Poor Colin Campbell’s letters were sad indeed. His mother’s father died a few days after he left and his mother is very ill – cannot possibly live long, her disease an inward cancer. She had not been very well for some time before he left home but had not an idea of what was the matter. The fatigue she had at the time of her father’s death developed the disease in a very short time. The poor fellow feels very sad and will return home the first steamer. I encouraged him to hope as much as possible and I surely trust he will yet see her alive. His letters today encourage him a little more. I also received quite a number of letters today and most delightful reading I found them. I was quite amused with the account of the “table movings”. It is curious but I think easy to be understood. Electrical properties being communicated by the body to the table, but that part has to do with mind over matter is beyond me. I neither believe or disbelieve. I know not what to think for scientific folks, particularly I should think it would afford quite a study and a very interesting one. Truly this is an enlightening, inquiring age. What wonders will not men be familiar with some twenty years hence.

This morning, Mr. Gillespie was in and invited us to tea this evening. Williams, Mr. Morgan and I went. We had passed a very pleasant evening. Mrs. Gillespie seemed very glad to see us again. They have just got nicely settled in their new house, one Mr. Gillespie has been building. After tea they took us through the house and it certainly was a very complete little affair and finished throughout very prettily. They seem as happy and contented as possible.

The “Star of the Union” arrived this evening. This evening is the first and only time I have been off the ship so I could not tell much concerning the improvements of the city. One thing I know, the streets are as dirty, dusty and dangerous as ever, being full of steps up and steps down and holes innumerable, whereby folks, unless they ever keep their eyes on the ground, run great risk of breaking their limbs. Coming home this dark night it really was unpleasant. Mr. Morgan walked on before, sounding the way ahead with his stout cane. I left Mrs. Gillespie’s with my veil on my hat. After walking most of the distance back, which is by no means short, I happened to think of my veil, felt for it, but it was gone. A gentleman stepped up. “You are looking for your veil. I picked up one about six doors back and handed it in at the store.” So back he and Mr. Morgan ran and in a moment or two my veil, much to my satisfaction, was in my hands. I had not an idea of recovering it as I know not when I had dropped it and the street was full of people going and coming.

Gave Mr. Morgan Mary’s present of selected “bon bons”. He was very much amused and pretended to think her quite saucy. Says he will pay her with interest.

Have had the freight all taken out of the Cabin today. I am very glad as we want the rooms sadly. Tomorrow the steward says he will have us in order, for which I shall be very thankful for part of our little Cabin is fitted up with trunks and we have no place to put anything.

I now have Mary’s letters received today. She writes particularly to Willie and sends him a kiss, the place of which is marked down on the paper. I took the little fellow on my lap and read it to him and when I came to the kiss and showed it to him, he took the letter in his own hands and then clasped it to his breast – with a look full of love and pleasure, and then he kissed it again and again and wanted me to read it over. This I did, and the little darling again took it, put his arms round it, and kissed it.

The steward’s brother gave me today a tumbler full of very nice ice cream. I was delighted to have it on Willie’s account who formed a great attachment for it while in New York. He enjoyed it very much, but I am tired and must go to bed.