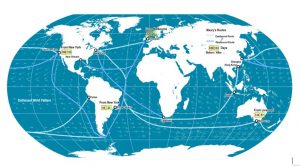 This day we had quite a delightful surprise. We supposed that our run for the last twenty-four hours would be about one hundred and eighty or ninety miles. Williams took his observation and then taking his seat opposite me at the table figured out our position and just as I was about to inquire he took his sextant and marched with it off to the deck. He made some mistake thought I. The gentleman soon came back and after comparing notes said “We have taken quite a jump”. “Why, how many miles?” “Two hundred and forty-four”. We had had a current carrying us along full sixty miles. This was to me very charming news and I hope tomorrow observation will tell the same story.

The weather has been very warm today, making me feel rather languid and my Willie boy rather fretful and hard to please. I am sure I do not wonder. Willie has been too noisy and wild of late. He has been too much on deck playing with Charlie. We think it best to restrict him somewhat in this. Willie shows a good deal of passion at times when not allowed to have his own way. This makes me feel my own responsibility greatly. Much, almost everything, as regards Willie’s disposition and future character and in many respects happiness depend on us his parents. May we have strength and grace given us to check his faults and cultivate his many, many fine qualities. He is easily guided, most affectionate and his love for his father and me is very strong. Dear, dear little one, how thou has twined thyself round our hearts. If Willie lives he bids fair to make a fine man. He has indeed a noble intellect for such a boy. May God bless him and make him a truly good man.

Could not take my usual evening walk owing to the rain, but Williams has just come to the Cabin and is going to read to me. 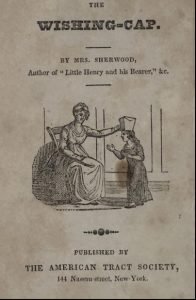 Sunday, a warm day with occasional rain – squally. This has made it rather disagreeable for us Cabin folks – skylight being on most of the afternoon. Williams read as usual this morning and will probably read a sermon this evening. As for myself, have read very little – a few pages in the history of the Puritans – but have written several hours. The rest of my time has been given to little Willie. How dearly he loves to have me talk to him and tell him a story. A day or two ago I gave him a picture book with Bible illustrations, each picture has a couple of rhyming lines in explanation. These I read, and then tell Willie the full story in as clear, simple language as I can command. He is delighted with the book and stories and comes to me with the book many times a day. I know not how many times I have been through it this day. I love to tell Willie stories. He is ever delighted to hear and listens with the most fixed attention but the moment I see his mind tires I either change the story to an old one or the amusement to an old one. A few days ago I bethought me of a little story I was very fond of when I was a child not much older than he. It was called “The Wishing Cap”. Now it is no less a favorite of Willie’s and I am called on for The Wishing Cap very often. Day before yesterday while sitting on my lap he asked for the story. I dwelt rather more particularly upon little Charlie’s lonely state as an orphan – telling Willie that he had not dear mama to go to for comfort when he felt sad or to love him or to take him on her lap and tell him pretty stories. The little fellow felt it very much, laid his head on my breast and took my hand kissed it again and again and then threw his arms around me. I was afraid he would cry but he did not though his eyes looked very red. I pleased to see this silent though strong manifestation of feeling and perfect comprehension of little Charlie’s lonely state but mentally determined not to weaken such feelings by often arousing them; I think it may be well sometimes.

Williams and I have been troubled lately with one or two naughty sayings of Willie’s, he having heard Charlie say them, such as “I will slap you on your mouth” and when checked in any way telling us to “mind our own business”. Of course, we spoke to him at once on hearing such expressions and tried to make him understand that they are naughty, but to no purpose. They are used sometimes many times a day. Last evening we determined that stop must be made to it. He used them both to me this afternoon. I then told him if I heard them again I should take him to my room and shut the door, this being my punishment for Willie. The little fellow at once repeated them. I immediately carried him to my room, shut the door and sat down. This is a great punishment to Willie. He walked up and down crying and demanding to go out. This I will not allow until all crying has ceased and he has promised to be a good boy. When the kiss and embrace of forgiveness is given the little fellow looks as bright and happy as can be. Both Williams and myself have whipped Willie once or twice during his little lifetime but it is a punishment I do not like, notwithstanding Solomon in his wisdom recommends it highly. A firm, decided, mild will on the part of the parent, with or without some such punishment as I today use, is all that is necessary to subdue a child. There my be cases when a rod as Solomon called it, may be necessary, but very seldom I should think. It would make me feel sad indeed now that Willie is old enough to understand and be reasoned with that either of us should have to resort to such measures.

Our wind has continued good thus far, but cannot be depended on – calm being very common in these latitudes. However, we may escape them. I most sincerely trust we shall. Today we made one hundred and ninety-six miles, not so well as yesterday, but very good. 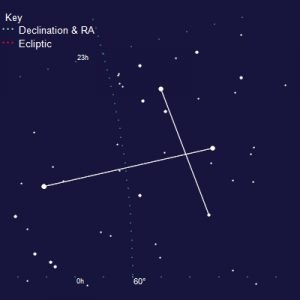 It has been a very warm, sultry day – rain most of the morning, making it most disagreeable for us poor souls who have to be shut up in the Cabin. I sometimes almost envy the sailors as they run about the decks with their bare feet during these, to them, refreshing showers. This evening I feel good for nothing – my spirits depressed and my heart heavy as lead – in fact forlorn. As for Williams he might as well be miles away for all the good his society does me. These light variable winds take up all his time and attention. We scarce see him in the Cabin and when I go on deck hardly a word or smile can I get from him. He sits on the side of the ship eyes roving over the clouds and the heavens – and then to the sails, and so back again. I often wonder what on earth he can see. As for any reading, why, that’s not to be thought of and I suppose not again till we have left San Francisco. My evenings nowadays are solitary and forlorn. I take scarce any pleasure in them – stroll from one end of the deck to the other in the most lazy, lounging manner possible – feel like a wandering spirit wandering about in pursuit of something but failing to find it. To say the least I feel in no enviable state.

Williams thinks we shall have the “trade” tomorrow. I am sure I hope so. I asked him why he thought so and he said from appearance of the clouds. The clouds after sunset were heavy and numerous, and, as he said, unlike the stationary ones we have had lately. They were all moving rapidly in the same direction.

This evening saw the North Star for the first time in a long while. My evening walk soon ended by my taking a seat on one of the benches. The heavens were magnificent with their numberless stars. So many large, clear, bright ones but my beautiful brilliant changing star surpassed them all. I think I never saw it look so splendid before. The ever changing color so decided and bright. I watched it for a long time till the clouds shut it out from my sight. I waited for it but it came not, and I left the deck for a while.

The “Cross” looks very bright and beautiful tonight but she is far to the southward and I suppose we shall soon lose her – the sooner the better; not that I do not love to look upon it, but the sooner we leave it the sooner we shall reach our port. I never shall forget the feeling of surprised melancholy disappointment I had when first I saw the “Southern Cross”. Since a little child I had had the strongest most intense desire to see this constellation I had studied and heard about and I seemed to see it distinctly with the eyes of my imagination. Oh what a glorious cross that was. I thought without a doubt that even my ignorant eyes would detect it and know it at once if it was to be seen in the heavens. I was not with my husband when he saw it for the first time on our first voyage. Knowing my wish, he came immediately to the Cabin to call me. I actually trembled with excitement, begging him as we went up the steps not to point it out. I wished to find and see it for myself. I looked where I supposed it ought to be, but did not see my cross there or anywhere – or indeed any cross. Finally, to my great disappointment I had to ask Williams to point it out. I soon left the deck, for I could not stay. However, I soon became accustomed to this cross, and also to love it. With regard to the Southern Heavens generally I was not disappointed indeed; no one could be disappointed. They are much more magnificent than our northern ones – abounding in the most brilliant stars. The “Milky Way” is one span of magnificence and glory. “The heavens declare the glory of God etc.” was, and is, constantly recurring to my thoughts as I gaze into the heavens. I think “Orion” as we see it south of the equator is the most brilliant constellation I have ever seen.