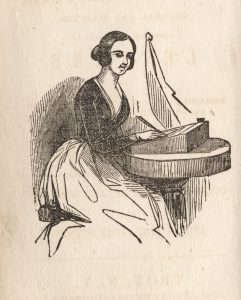 Determined I am to keep a journal and when I have once fairly commenced I know it will be a pleasure – the very act of scribbling of thoughts, feelings and occurrences. Also it will be most pleasant to review at some future day – if I may be so happy as to see it – and then, if my Willie lives and I can in any way make this interesting, what a treasure it will be for him to look back upon and know somewhat of the doings and thoughts of his parents and self in younger days.

Just now the commencement seems rather stiff and I hardly know what to write but this will pass away and enjoyment will slowly follow. I wish with all my heart I had commenced this journalizing, at the very least, some two years ago when I first commenced my sea life. Then all things were new and delightful, everything seemed beautiful, grand or sublime, and my mind was filled with thoughts of beauty, delight, admiration and joy, but two voyages have made it somewhat of an old thing and first impressions will not continue. Now it is only at times that I feel that longing to commit to paper what passes in my mind, while before I felt as if I could write, write all the time. When I left the deck my baby claimed all writing time except what I gave to letters, but this is stiff enough, and looks like a forced commencement of one who had nothing to say. 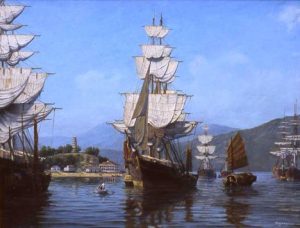 We left New York on the twelfth. Williams is weak and feeble, not having recovered from his fall, and with a cough which has, however, nearly left him. Willie is well with the exception of a cough which we now think and hope will prove to be whooping cough. It will be the most favorable time for him to have it. So far we have had a pretty good run, but old Neptune handled his friends rather roughly for the commencement of a voyage, not giving our good ship a moment’s quiet and in consequence allowing us poor souls to subside into anything like comfort or order for some six or seven days. Indeed, today is the first day that I have really felt at home and reconciled to this third long voyage. May something turn up to give Williams a good business at home and make this our last business voyage at sea. If I had not been enough seasick to make me feel rather miserable and very lazy, I should have enjoyed much the magnificent spray that was constantly dashing over our vessel. The sea was very rough but the weather clear and the spray must have and did (as I a few times witnessed it) look beautiful curling many feet above our ship and then raining over us heavier than any shower. Our deck was constantly deluged with salt water, making it impossible for me to mount there.

Now the weather is perfectly delightful, and we can enjoy all that is enjoyable on deck. This change is delightful to our little Willie boy who for some five or six days had been confined to the Cabin, which confinement he bore like a dear good child, amusing himself with his books, pencil, playthings, and having stories told and read to him.

Yesterday, after finishing unpacking and arranging drawers, I went on deck to enjoy the delightful afternoon; found Willie, Noah and little Charlie in high glee. A bow-wow had been found, one belonging to a sailor. That alone would have delighted Willie, but Noah had fastened him to Willie’s little wagon and set the dog to scampering about the deck. Noah guiding the dog by a string and Willie following, fairly dancing and jumping with delight. Dear child, I am glad he has got the two boys to run and play with, for however much Mary, his nurse, and myself might amuse and play with him, yet it could not take the place of children playing together, and Willie dearly loves children, always making friends whenever he sees them, and that, I am sorry has necessarily been very seldom.

A beautiful warm day. What would not our New York friends give to enjoy it with us, they perhaps buried in deep snows. I wish some of them were here to amuse Williams; it is dull work for him, feeling as feeble and miserable as he does. Strange he does not get better; we surely thought the change for better would be very great as soon as he got to sea. His side troubles him very much. He thinks it is owing to the motion of the ship. I trust from my heart that it is nothing more.

Evening: I have just been reading the newspaper accounts of the loss of steamboats  “Henry Clay, N.R.”, and the “Atlantic of Lake Erie”; both seem to have been lost through carelessness and foolhardiness. Many lives were lost and the saddest part, so many little helpless children. I feel now like shunning all steamboats or railroads. How can families enjoy life where the father and husband is thus exposed once and twice every day; sure am I that I should suffer the very torments of anxiety – but what is sure, I would not live so.

Dear little Willie has coughed very much today, and we do not doubt but that it is the whooping cough. God grant that this darling, affectionate little one may be spared, and made a blessing to us. He is indeed very, very lovely, and so bright and intelligent. I think we are both very proud of him; I know for a certainty that I am.