THE LOSS OF THE S.S. INDEPENDENCE 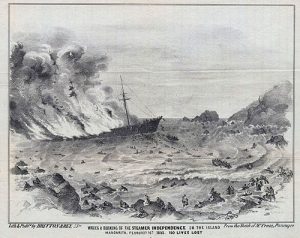 In 1853, the Steamer S.S. Indpendence was on its way north from San Juan del Sur, Nicaragua to San Francisco with over 300 passengers onboard . In the early morning hours of Feburary 16th, the ship hit a rock within 300 yards of the shore of Margarita Island. The captain said he mistook the rock for a whale, but passengers who were on deck said it was a very clear day and they had warned the captain, but to no avail.

The ship took on water immediately, and the call was made to back off the rocks, while crew and passengers used buckets to remove as much water as they could. Fire from the furnace ignited the ship causing widespread panic. Some people were saved in lifeboats which made it to shore, but many perished either by fire or drowning or jumping off the ship.

Those who made it to shore faced a difficult situation as well, as there was no fresh water or provisions, and no apparent means of rescue.

After living in this manner for 3 days, inventing ways to purify water, some survivors made it to the other side of the island where they found whaling ships who provided assistance.

The Captain was able to find a ship to bring the survivors to San Francisco, a voyage of 4 more weeks.

Horrifying account by one of the passengers, Ezra Drown, who lost his wife

Now was the agonizing time — The flames spreading rapidly, parents embraced their fond children, imperiling their cheeks with warm gushing tears; devoted husbands embraced their tender wives, meeting their lips in affection’s sweet kiss, relying upon god and their own exertions for salvation from the fiery and watery abyss that yawned to receive them. Some men began to jump overboard, and by swimming hoped to gain the shore. The breakers running high, with a heavy sea, the act seemed inevitable death, as it proved to many an unfortunate soul. The remaining boats were lowered, and for want of management, were filled with more men than women, and succeeded in reaching the shore.

In vain did Capt. Sampson and Purser Freeborn cry for these boats to return to the ship; in vain were warm appeals of Capt. Steele to induce the crew to return with them. After leaving the first time, only one, got off by the indefatigable exertions of Mr. Herron, the steward, returned. In the meantime, on board the ship, Purser Freeborn worked admirably as did Mr. Collins, the engineer and Capt. Sampson, as well as many of the passengers. Men of wealth were offering huge fortunes to be saved. Men and women, as the flames were spreading, screamed frantically, the former smiting their breasts, the latter tearing their disheveled hair. The scene beggars description. Wealth and poverty were on an equality, and sank together to rise no more.

Females could be seen clambering down the sides of the ship, clinging with deathlike tenacity to the ropes, rigging and larboard wheel. Some were hanging by their skirts, which unfortunately, in their efforts to jump overboard, were caught, and thus swung, crying piteously and horridly, until the flames relieved them from their awful position by disengaging their clothes, causing them to drop and sink in the briny deep. Mothers, going to meet their husbands, threw their tender offspring into the waves, rather than to see them devoured by the fury of the flames, and trusted to fortune and chance to take their bodies to the shore. O! but the shrieks and cries of the true and confiding companions and relatives, as affection’s and friendship’s ties were about to be sundered, are beyond human description. Many an eye spoke the gentle goodbye, though the lips moved not. Oh! how horrible were the lamentations of the dying as they were contending between hope and a watery grave! As I passed through the surf, how horribly sounded the piteous moans for help! All around me were the sinking bodies of the passengers and crew of the steamer Independence.

O God! What a situation to be in! Planks, spars, trunks and coops, covered with human beings struggling energetically for life, some wafted to the shore, others out to sea, some sinking, others being miraculously preserved. Here I saw females and children providentially rescued — then lost! Here was a kind husband who had sworn before God to protect her whom his soul loved, struggling for her safety; there was a father bearing his affectionate son to safety to the shore, looking around but to see the wife of his love dashed from the position in which he had left her, by mad and unthinking men jumping upon her and driving her to the bottomless deep.

On the shore what a scene! At a time when money had no value, could be seen the sacrilegious pillaging and plundering the dead — old men and young men were stripping the bodies of clothing, securing the contents of their pockets, and actually quarreling, yea fighting over a corpse for the plunder! But this is too horrible; suffice it to be said that in less than an hour from the fatal collision, not less than 150 of the 400 souls on the Independence had found a watery grave.

With these rocks laid down upon the chart, with warnings in the books to keep away from the entrances into Magdalena Bay, on account of the strong currents there; or without this knowledge previous to coming near the Island, when the breakers could be seen for a long time, and the rocks themselves for a considerably space — and sufficient at least to have averted the accident, as good men will swear — does it not come irresistibly home to the mind of everyone, that the Captain, who would stand upon the wheel house of his ship, and permit her to be stove in upon rocks, plainly to be seen, is either insane or one of the earth’s most heartless creatures

That he was insane no one will say, would to God we could. That the act was deliberate and intentional, can and we believe, will be successfully established.