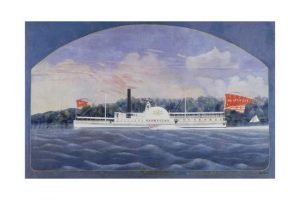 The Hudson River’s worst steamboat disaster occurred on July 28, 1852 when the American side paddle wheel steamboat Henry Clay caught fire, killing over 80 men, women and children and injuring many more.

The 150-mile run between Albany, NY and Manhattan was popular at the time. Passengers had the option of taking either a four-hour often hot and dirty train ride on the new Hudson River Railroad or a somewhat classier steamboat ride that took twice as long. To attract customers and win bragging rights, steamboat companies allowed their vessels to race other steamers, a dangerous stunt that could overwork boilers, setting off explosions and fires. Sometimes they even tied down the boiler safety valves to increase speed.

Steamboat travel was hazardous enough, even when the vessels weren’t going head-to-head. Storms, collisions, sand bars and submerged trees — called snags — claimed hundreds of steamers plying the nation’s rivers, lakes and coastal waters in the 19th century. Fires and boiler explosions were a constant threat, often claiming 100 or more lives in a single, horrific blast. Just months before the Clay disaster, more than 100 Mormon immigrants were killed when the boiler aboard the Missouri River steamer Saluda exploded.

The newly built Henry Clay was considered one of the classier steamboats on the Hudson, said Kris Hansen, author of the book, “Death Passage on the Hudson, The Wreck of the Henry Clay.” The passengers who boarded the steamer at the Albany docks on the morning of July 28, 1852, included merchants with upstate business interests, lawyers working the state’s capital and other well-heeled travelers, some from as far away as New Orleans, Cincinnati and Chicago. Many were accompanied by their families.

“There was a certain glamour factor with the boats. They were pleasant,” Lange said. “The trains tended to be dirtier and hotter.”
The Clay’s three owners, who included the captain, were also making the trip.

On this particular day, she was sailing on the Hudson River from the river port of Albany, New York, to New York City. Early into the sail the Henry Clay raced the fast steamboat Armenia, which ended only when the vessels collided near Kingston. The impact caused little damage but rattled the Clay’s passengers, some of whom confronted the crew. Co-owner Thomas Collyer assured them they were in no danger and the ship’s clerk was reported to have said he “wished people would mind their own business.”

Shortly before 3:00 pm as the Henry Clay traveled mid-river passing Yonkers, New York, the call of fire onboard was heard. Fire roared up from the engine room and quickly engulfed the midsection. Later, it was theorized that the doors on the boiler’s furnace weren’t sealed tightly, allowing flames to lash out and set fire to the wooden ship. Most passengers were told to head aft, while others fled to the bow.

The pilot, Edward Hubbard, an experienced forty-three-year-old seaman, quickly turned the burning ship eastward to travel the mile distance to reach shore. Hubbard crashed the boat bow first onto the sands at Riverdale, New York, hoping to save his passengers. Passengers on the bow made the short leap to the beach below, but those huddled at the stern were still in deep water. Forced to choose between a wall of flames and the Hudson, many jumped overboard. Many could not swim and drowned either due to the heavy clothing of that era or as others pulled them underwater trying to save their own lives. Others managed to make it to shore on their own or were aided by other survivors and bystanders. People that remained on the boat perished in the fire.

Until then, most of the nation’s worst steamship disasters happened on remote western rivers. The Clay disaster, however, occurred virtually on New York’s door step. Hundreds of people watched the tragedy from the river bank, while reporters from Manhattan newspapers were able to reach the scene while the wreck still smoldered.

Reports indicated that upwards of five hundred people were on board with only two lifeboats, which proved useless. Many of the victims came from prestigious families which made the disaster more newsworthy. Former New York City Mayor Stephen Allen was among the dead, as was Andrew Jackson Downing, a famous landscape architect of the era who planned the grounds of the U.S. Capitol and the White House. Others included Caroline DeWint, Downing’s mother-in-law and a granddaughter of John Adams, and Maria Hawthorne, sister of Nathaniel Hawthorne.

The disaster made headlines across the country. The Clay’s three owners and the ship’s officers were charged with manslaughter for creating a dangerous situation by racing the Armenia. All were acquitted.

The outcries across the country caused Congress to act. A month after the disaster Congress passed the Steamboat Act of 1852. It provided for stricter rules for steamboat operation and steamboat inspection and required licensing for pilots and engineers by the Steamboat Inspection Service whose responsibilities would eventually become that of the U.S. Coast Guard.

Steamboat disasters still occurred after the legislation’s enactment, but their frequency diminished. In 1851, more than 1,000 people died in steamboat accidents. In 1853, that number fell to 45. 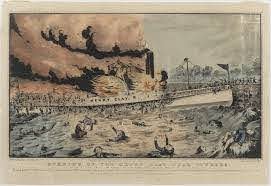