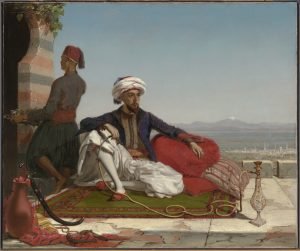 Bayard Taylor’s Description of the Sailing

From A Visit to India, China and Japan in the Year 1853 by Bayard Taylor

The transition to a winter climate was like a cold-plunge bath. The thermometer
sank to 25° and water froze on deck. At noon a
pilot-boat hove in sight, running down towards us. The ship
was put about, in order to meet her, but this movement gradually
brought a bark, which was to windward of us, between us
and the boat, and as the latter hoisted signal, the boat was
obliged to give her the only pilot aboard.

One hundred days from China. Oh! that we could arrive today. It is doubtful though we are very near. This morning at five we were but thirty miles from the “Highlands” but alas the wind is again dead ahead.

A little while ago a pilot boat was announced approaching us, but as the fates would have it a little brig ahead of us exhausted the boat and she has gone back. I trust another will make its appearance.

Today a fine clear, cold day, little wind and I enjoyed with Mr. Taylor a long brisk walk after breakfast. We happened to speak of gentlemen’s shawls and their comfort in cold weather. He told me of a warm silk one that he had purchased in Syria – Lebanon make – when in Egypt. It formed a part of his Arab dress, worn as a belt. It is of all colors in strips about four yards long and rather more than a yard wide. Originally the silk was in three strips being manufactured very narrow. These are joined by a wide openwork stitch. When we returned to the Cabin, Mr. Taylor showed it to me. The colors were very bright and he says that wearing it only makes them more and more so. It was really very bright, pretty and fanciful. He had promised to make me a turban such as he wore when traveling in the desert (by having dressed in regular Arab style). I told him to make it of his long bright shawl, so we twisted it and he wound it in regular style round his head.

The gentlemen got in a showing humor. Mr. Taylor next brought me to look at some hair that he had cut from the head of a mummy when in Egypt when the showman’s head was turned. It was the mummy of a princess three thousand years old. He had told me of this hair before, said it was fine, beautiful and of auburn color but notwithstanding this, I was surprised at its beauty; so fine, soft and silky was it. The color was perfect auburn. Mr. Taylor intends having it set in a ring.

He then produced a very beautiful Japan agur box, also a Japan tea cup, given him by Commodore Perry, of lacquerware. A beautiful tea color painted with gold leaves on the outside. The inside was red like my Soo Chow cup. This Japan cup and cover was light and its form elegant. Mine really looks like a clumsy affair in comparison.

Next he made his appearance in his Spanish jacket and cap, which was certainly very gay and picturesque. Mr. Contee also brought out a very elegant Japan box. This was round and very large. Its birds and flowers very gay. On removing the lid, I found the box was divided into many compartments. In this respect resembling the Chinese fruit dishes.