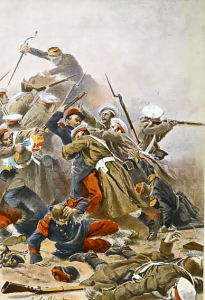 Sarah refers to a conflict between Russia and Turkey.

Mr. Taylor will go off in a boat and get papers,

all being anxious for the latest news, particularly about Turkey and Russia.

Seems to be that Russia will hardly go to war when she will have England and France to cooperate with Turkey.

I hope we shall gain certain news.

This is referring to the Crimean War, which began in early October 1853 and ended in February 1856.

The Ottoman Empire (Turkey) with the backing of France’s Napoleon III and Britain, declared war on Russia.

This was the first time military forces used modern technologies such as explosive naval shells, telegraphs and railways.

Florence Nightingale became famous for the creation of modern nursing during the conflict.

Russia lost. The Treaty of Paris was signed.

The war was a turning point for Russia, and lead to many reforms within the country.