Sarah writes of visiting the “Chinese Exhibition Room” while in San Francisco.

located at the corner of Sacramento and Leidsdorff Street 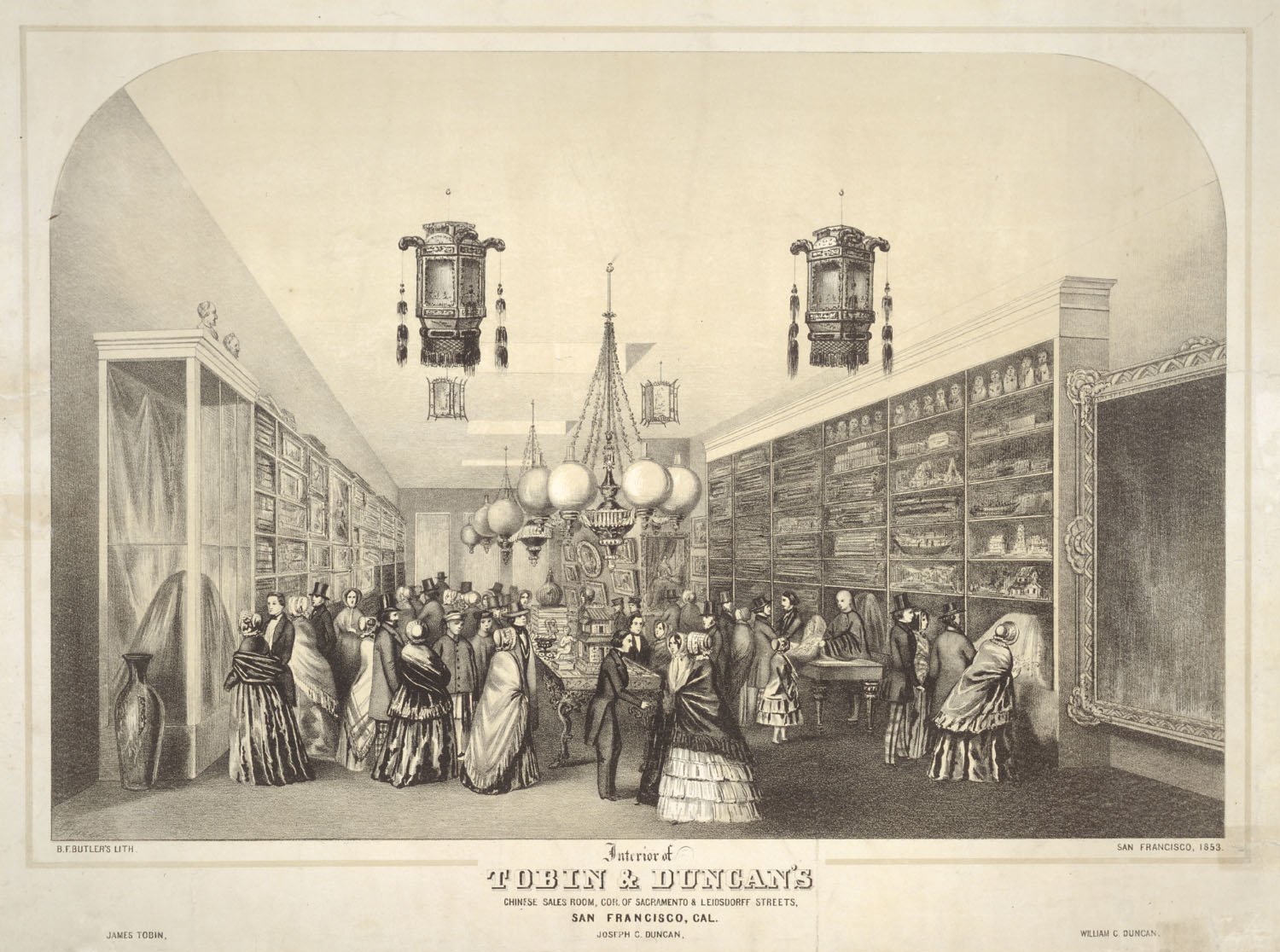 Who was Joseph C. Duncan?


Joseph C. Duncan was born in Philadelphia and came to San Francisco during the Gold Rush in 1850 to enter the printing trade. His press was destroyed in 1851 – perhaps by one of the great fires –  causing Duncan to explore other businesses.

He opened Duncan’s Chinese Sales Room, where he offered a variety of Asian textiles and other popular objects that ships regularly brought from Hong Kong, Canton and Macao to San Francisco.

WHAT DOES SARAH SAY ABOUT THE SHOWROOM?

This morning I went with Mr. Sanford (also Willie and his nurse) to the Chinese exhibition room. There were very many pretty things, though not so handsome generally as the display last year.

Willie was delighted with his visit to this store, so many things to please. Chinese boats, etc., but his particular favorite was a Chinese dragon made of some metal. There was a ridge along the back exactly like his wooden hyena. Willie recognized that at once and claimed it as a hyena. The mouth was large and open and it pleased him much to put his hand in and find the hyena would not bite. He was not satisfied until we had all put our hands in the mouth and were satisfied concerning the fact. Willie looked so beautiful, bright and intelligent, that he excited no little attention while there, particularly with the Chinese, of whom there were a great many. There was a fine painting there that attracted more of my attention than anything else. It was painted by Jacobs, Vice President of the Royal Academy, Dresden. It represented the scene where Samson betrayed Delilah and is bound by the Philistine. It struck me as being a very fine painting and his conception of Samson I thought excellent. The expression of his countenance such as you might fancy Samson’s when feeling himself for the first time bound beyond his strength of liberation. It is conveyed much of what we fancy his face showed but to me not all. It is a mighty subject. Who could fully depict it? I thought Delilah’s expression of countenance very good, very descriptive – the expression of the other countenance good, but not to me as satisfactory as they might be.

THEY WERE KNOWN FOR THEIR “RAFFLES”

This is the raffle that was taking place when Sarah, Williams and Willie visited!

READ WHAT SARAH SAYS ABOUT THE RAFFLE

The chief objects of attention however are the prizes from the Fourth of July raffle. There are to be 2400 prizes valued at $65,000. The first prize is an ingot of gold worth $5,000. There is a great deal of handsome jewelry also very beautiful watches and any quantity of Chinese prizes. The evening before we visited this room, Mr. Morgan and Mr. Sanford spent the evening here. This raffle was the chief subject of conversation, the result that I have now six chances and Williams one in the wonderful raffle. It will have the effect of keeping us a little excited when the subject is thought of, but as to its ending in anything, I am more than doubtful. We shall know on our arrival in New York, not before.

THE MAMMOTH INGOT OF GOLD RAFFLE!

In presenting to the public a collection of the richest and most costly goods ever offered in this city, we pledge the reputation of our well known house for the same fair and impartial distribution of the prizes which has heretofore governed our annual raffles. The Jewelry is guaranteed of the purest gold, and the Gems of the first quality. The Watches have been purchased direct from the well known firm of A. I. Tobias & Co.. and are warranted superior time-pieces. The Jewels are from Messrs. Oaime. Guillemot & Co. and from the first London firms, with guaranteed invoices attached. The entire cargo of Chinese Goods has been selected with great care: the articles being of the newest designs, and most approved styles. A fair business value has been placed upon every prize — the whole amount yielding the legitimate profit of twenty per cent. Catalogues of prizes will be forwarded on Application, at our charge. It contains a list of 833,000 WORTH DIAMONDS. PATENT LEVER WATCHES, and MASSIVE SILVER WARE, also $30,000 worth of the richest and most valuable articles of China and Japanese manufacture.

As an art aficionado, Joseph C. Duncan started collecting art from many art dealers in Europe and made himself so well-known that he became the first president of the San Francisco Art Association.

He then came up with a very popular way to make money.

“In a scheme perfectly suited to the reckless, gambling, go-ahead spirit of the gold rush, Californians purchased 100,000 tickets (shares or notes) at $1 each, which, in mid-November were drawn from a wheel of fortune at the Metropolitan Theatre. Over the course of two days, in a great spectacle that provided entertainment and promoted culture, 6,000 superb articles were distributed to the crush of excited Californians who jammed the theatre.” 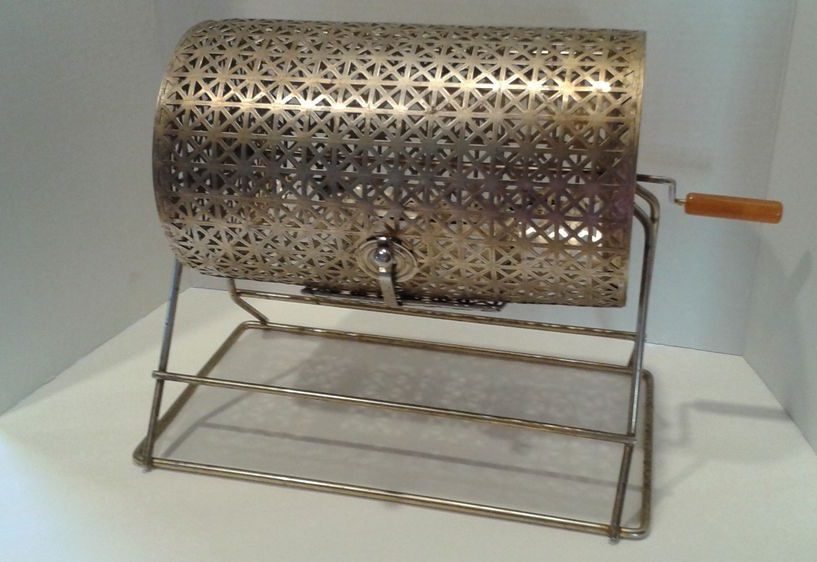 The paintings and art were given away to shareholders in lottery style.

No one knows, but the event was wildly successful, in any case!

In later years the lottery failed and Duncan organized the Pioneer Bank of Savings and Deposit for regular, working class people. By offering to pay depositors 12% rather than the customary 8%, his bank soon had more than $1.1 million in deposits. He speculated with the deposited funds and lost, causing the bank to fail. 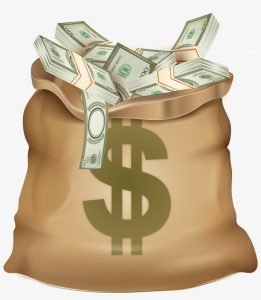 Joseph Duncan attempted escape by ship, then hid in San Francisco, sometimes dressed in women’s clothing, sometimes hiding in a fake bureau drawer. When he was finally captured he was acquitted after four trials.

Duncan’s wife divorced him and, after several more adventures, he died in 1898 in a shipwreck off Cornwall with his third wife and their youngest child.

from the San Francisco Examiner:

Thousands of people milled around the bank in shock, having lost their life savings. “The creditors … included men of nearly every nation under the sun,” wrote the Chronicle. “The feeling of the crowd was most bitter against the absconding banker and no man ever was cursed in so many different tongues as Duncan.”

With public outrage and pressure to find Duncan at a peak, Captain of Detectives Isaiah Lees faced his greatest challenge — and his wiliest opponent. Duncan’s house and the house of some of his friends were searched, but there was no trace of the banker. False Duncan sightings were reported throughout the country.

Duncan’s son, Willie, was arrested and charged with aiding the escape but was bailed out after a few days. Every train, ship, wagon, coach and ferry leaving The City was checked. Lees guessed the escape would most likely be by ship, and a schooner named the “McKinnon” came under suspicion when it was cleared for a trip to Nicaragua. Lees kept a steamer ready to intercept the McKinnon when it left the harbor. On the evening of Feb. 17, 1888, when the McKinnon entered the Bay, it was followed and boarded by Lees. Police found Duncan’s clothes and possessions, but not Duncan. He had jumped on another boat during the chase and had returned to shore.

Lees began following Willie Duncan and eventually tracked him to a three-story boarding house on Kearny Street, where he believed Joseph Duncan was hiding. On the evening of Feb. 24, 1888, Lees led a raid and captured Joseph Duncan, who was half-dressed and lying on a cot. Police carefully searched the place, and Duncan’s secret hiding place was revealed: a small bureau in the apartment in which the draws had been sealed up and the back removed. In the event of a search, Duncan, a small man, would sneak into the back of the bureau through a secret door.

Duncan was tried on forgery charges, but after four inconclusive trials, he was set free.

One of Joseph Duncan’s daughters was the famous free-spirited dancer, Isadora Duncan,

Raised in California, she performed throughout Europe and taught her own philosophy of dance to many students around the world. 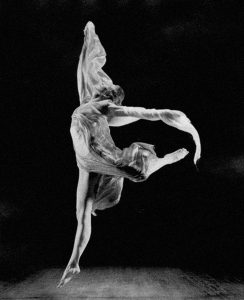 Isadora lived a wild but sad life. Two of her children, born of liaisons with two different married lovers, drowned in 1913 along with their nurse in Paris when their car rolled into the Seine. In 1914 another son died soon after he was born.

Isadora met a tragic death at age 50 on the French Riviera,

when the silk scarf she was wearing

became entangled in the wheels and axle of the car in which she was traveling.