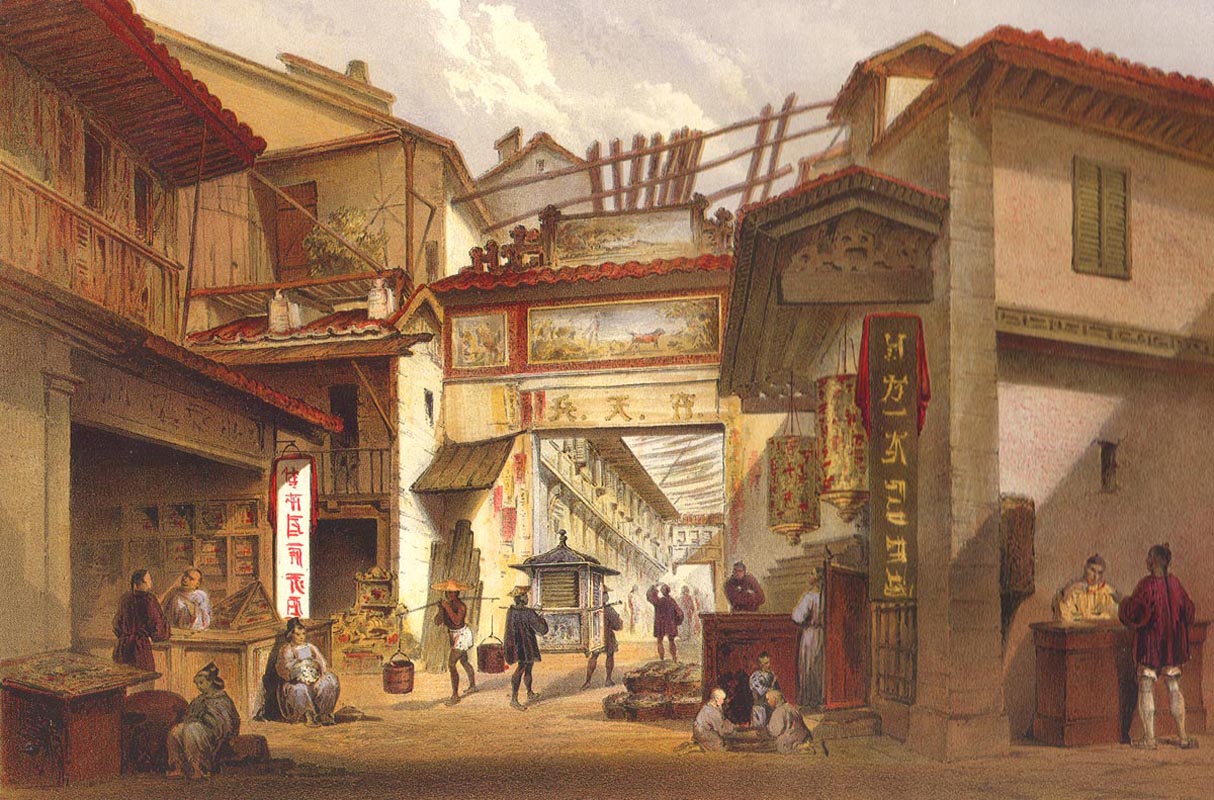 The Howlands were in Canton

Canton was the first major city up the Pearl River from Macao.

The Europeans called it Guangzhou. 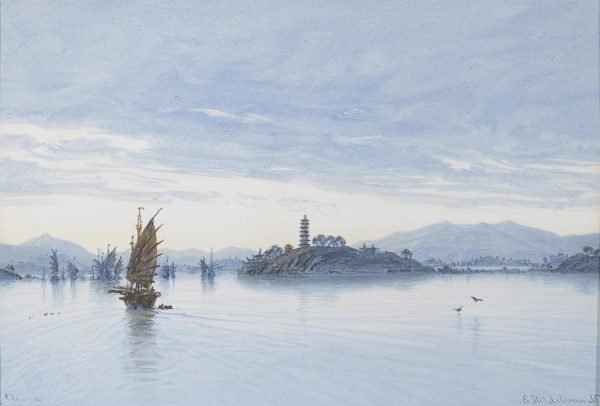 Prior to the First Opium War,

Canton was the center for trade for foreign merchants:

The traders were only allowed there for the “trading season” – then they had to return to Macao.

which were living quarters, warehouses and offices.

This foreign quarter was known as the “Thirteen Factories”.

They flew their nations’ flags. 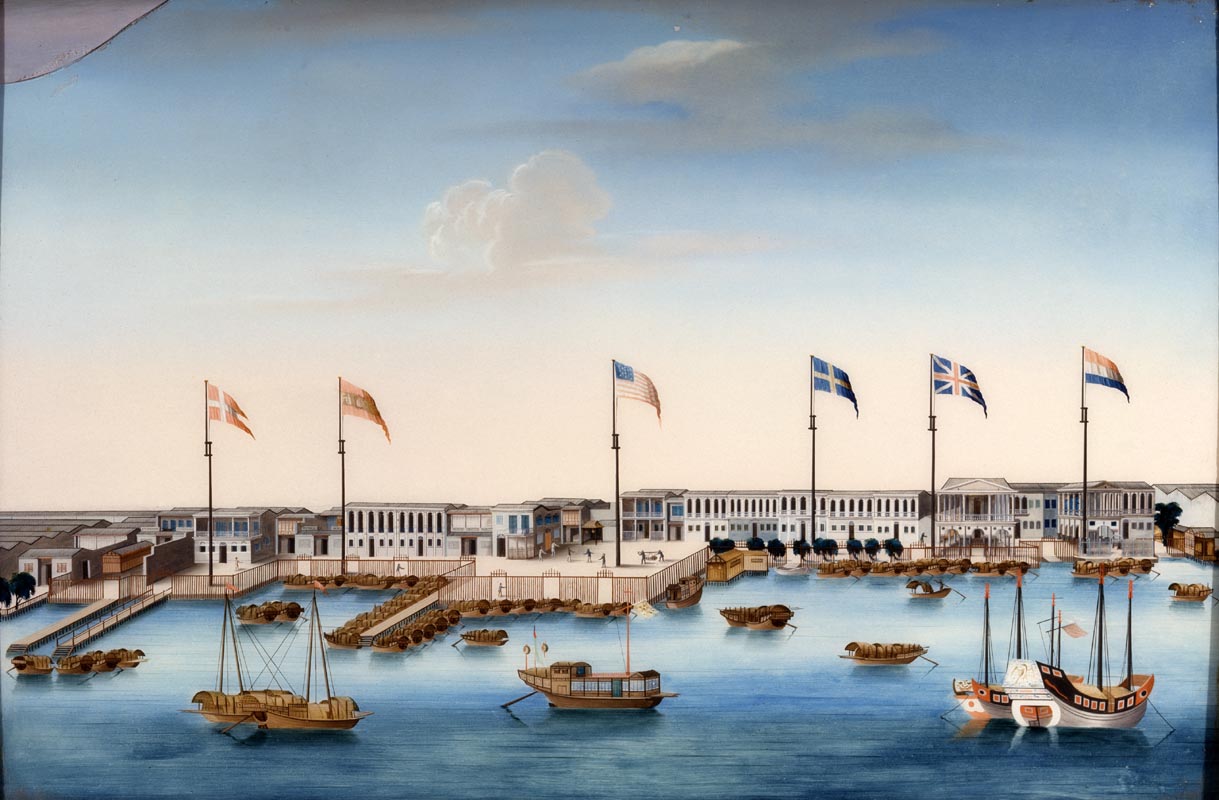 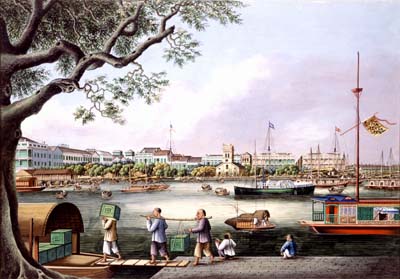 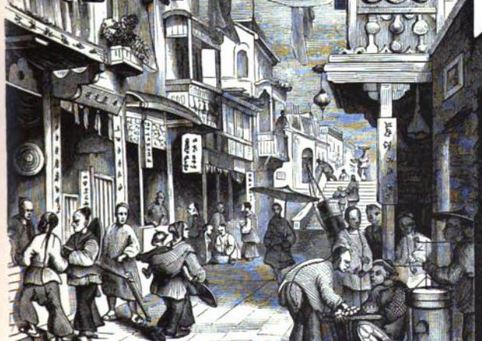 The wives and families of the merchants stayed in the Portuguese colony of Macao.

Before the 1850’s, foreign women were not allowed in Canton.

Those who did go were novelties to the Chinese men who had never seen a Western woman.

Harriet Low and her aunt almost caused an international incident when they dressed as boys, secretly arrived in the city and stayed for 3 weeks! 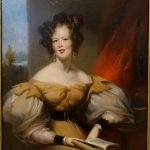 Read about their Adventure Here

Harriet Parker, wife of Dr. Peter Parker, was the first Western woman to be permitted residence in China.

Harriet Parker’s greatest desire was to set foot on land. She wanted to see the strange country that her husband loved and meet his Chinese friends. Her reception was completely different from that she expected. As she and her husband walked up the road from the Canton wharf, they were surrounded and all but overwhelmed by excited, pushing, shoving Chinese who were seeing an American woman for the first time. The crowd swarming around them commented on her long skirts and her hair style. Some wanted to touch her clothes. Others thought she would bring bad luck. Putting her between them, Dr. Parker and one of his Chinese doctors hustled her into the haven of the house. There she remained for weeks, going out only as far as her own terrace. Even so the curious took to rooftops and climbed trees to look at this strange creature.

Sarah attended the Feast of Lanterns in 1852 in Canton with Dr. and Mrs. Parker.


What was Sarah’s Experience?

But one of the most interesting and at first startling parts of our adventure was seeing the immense crowds of Chinese that we were the means of collecting. As Doctor Parker said we were to them a greater curiosity than was anything that we would see, to us. No doubt there were hundreds of Chinese men who saw for the first time that night, foreign women. It being something quite new for the women to venture out in such a scene and there were thousands of Chinese who came in from the country to be present at this celebration. When we first entered the street there were comparatively few to be seen. We came almost immediately upon one of the towers, or theatricals, and while my whole attention was taken up with examining the scenes, crowds were unbeknown to me collecting in numbers around us as my eye was withdrawn to more spectacles. I was startled to see the many black eyes and bronze figures cluster and almost touching us. Such looks of intense curiosity as were then beholding me, I never before or since beheld. I said to the Doctor “how shall we now be able to proceed?”, we being completely, as far as the eye could see, hemmed in by immense numbers. But the Doctor gently waved his hand and instantly the crowd separated, pressing back against each other and leaving a clear road for us and thus, whenever we would stop, we were instantly surrounded, but the moment we attempted to move, room for us was instantly made. Such a peaceful and well disposed crowd I never before beheld, for all of the crowd and pressing, they never once touched me. When we would turn from one street and enter another, perhaps not a man would be seen, but on venturing to move forward after looking at the first object that had attracted our attention, we would find that we were again surrounded by these dark and almost naked forms.

Tensions developed between the foreign merchants and the Chinese.

In an effort to halt the Opium Trade, the Chinese blockaded the factories. 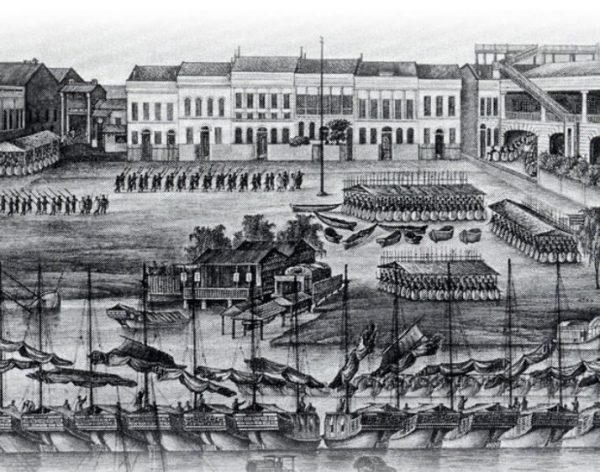 The British used their naval power to defeat the Chinese,

Hong Kong was ceded to the British. 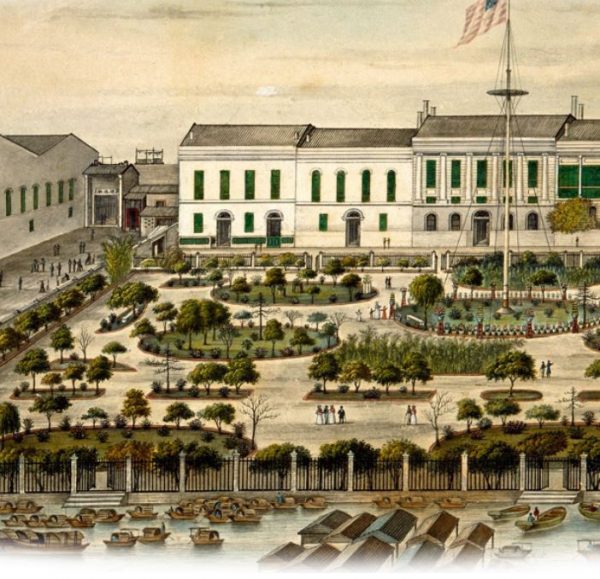 Sarah describes the Feast of Lanterns

The great night for the “Feast of Lanterns” is at the full of the moon but they had already commenced their display and we saw more or less of it every night while there. It consists of a gay lantern or lanterns, as many as one can afford, suspended over every house and boat of which there are an innumerable number on the river. It is a very pretty sight. The foreigners used to comply with the custom and lanterns were suspended over each hong, but that has been given up for the last few years. Last year when in Canton we saw many of these bright lanterns elevated to a great height by means of kites; so bright and distant and stationary were they as to be easily mistaken for stars unless watched closely and for a few minutes. In some instances there would be long strings of these lanterns – perhaps a dozen or more on a string – elevated over a boat. The effect of these is very pretty – the slightest breeze being sufficient to wave them backwards and forwards. The last night of the feast the lanterns are burnt up. 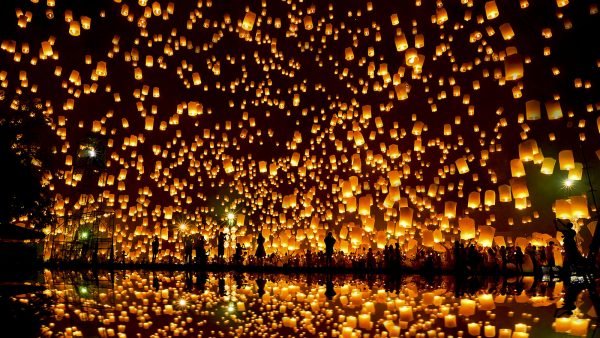 The other religious ceremony – the name of which I do not remember – I also witnessed a year ago. It lasts about six weeks – the streets are illuminated and decorated in a very gay and costly manner. Three streets only at a time are thus illuminated and these for three nights, then the next three in order and so on, till all the city outside and within the walls have had their share.

Last year, after some little persuasion, Williams gave his consent that we should go and see for ourselves these illuminated streets; his consent only being given when Doctor Parker promised to go and take us under his particular care. It was the second night of the illumination and of course we witnessed the first three streets. When we entered the first narrow street (all the streets of China as far as my experience goes are narrow) it was one blaze of light, innumerable strings of all colored lanterns were suspended across the streets and every little while we would pass underneath a high square tower, the inside illuminated from top to bottom with circular rows of little lamps which shining as they did on the tinsel ornaments and figures of all colors and kind presented a very pretty and fairy-like show. These towers were quite high and all seemed to differ. Also, every few moments, we would come to staging thrown across the street – on the front part were automaton figures representing Chinese men and women about 1 ½ feet in height and most admirably made, the faces most expressive. These figures were acted upon by some machinery and made to represent scenes from ancient Chinese history. While these scenes were acting, there were a number of Chinese singers both male and female on the back part of the staging chanting in a wild sort of manner the story acted by the figures. We went but a short distance through each of the three streets but met in our walk a number of these scenes. Besides these, there were Chinese curiosities on all sides of us, trees dwarfed and trees made to grow in such a manner as to represent animals of various kinds and also to represent boats – some of these representations were excellent. At every corner we came upon immense idols. They were actually startling, while at their feet lay many sleeping Chinese. It was sometimes difficult to see them in their little gloomy recess as they lay with their naked bronze skins.

In 1853 Canton was involved in the Taiping Rebellion…

This year Doctor Parker told me the ceremony would pass off very quietly and with little show – the Commissioners having requested the people on account of the rebellion to keep as quiet as possible and to prevent all large gatherings; also to save their money which they would probably ere long want.

where they met the Sea Serpent.

Some of Commodore Perry’s vessels were in the harbor.

The band of the Mississippi played farewell songs

and they exchanged cheers to wish each other well.

There were one or two of our naval ships at Whampoa. The band of the Mississippi came off in a small boat and played several sweet tunes by the side of our ship, the rowers keeping her by our side as we were slowly towed along. Just before parting they played “Home Sweet Home” and then cheers and answering cheers followed in quick succession, till we were far parted. No doubt many of them wished they were with us. 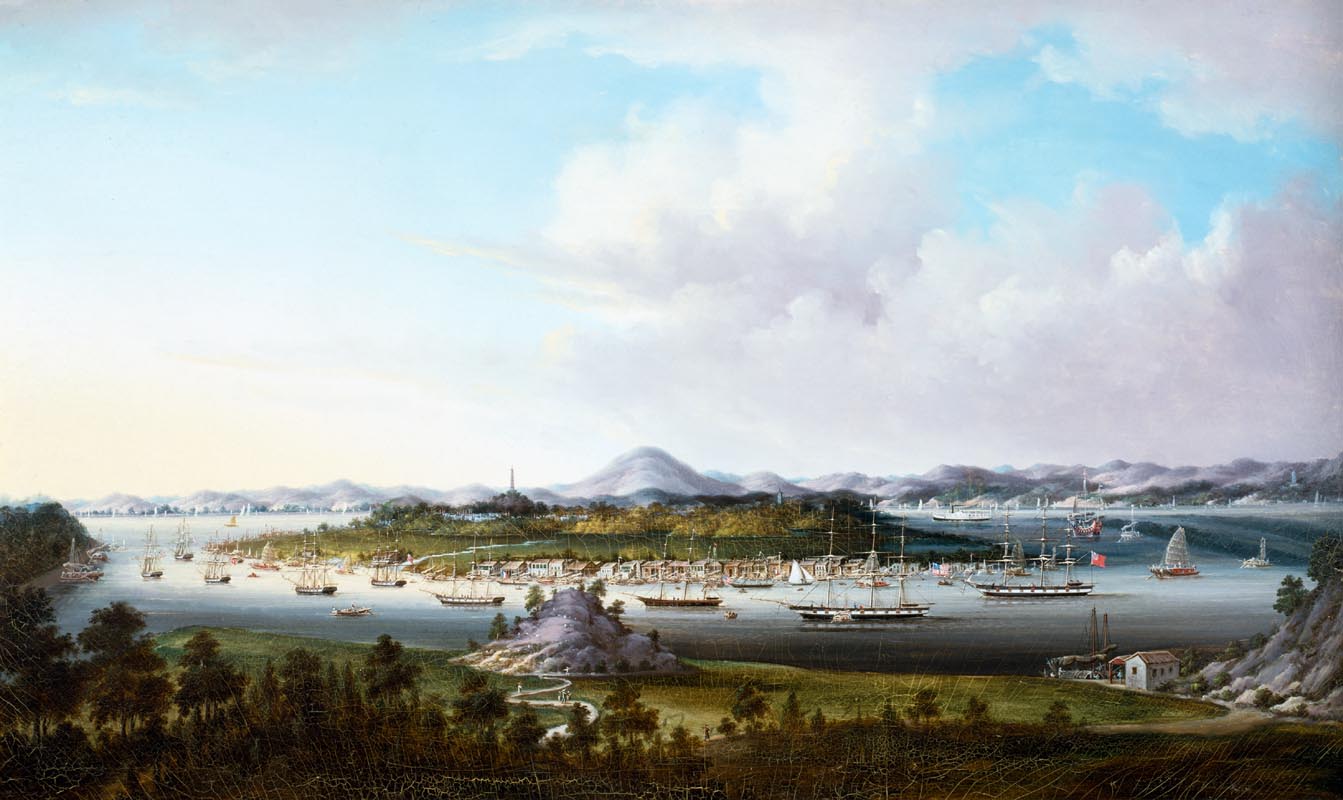