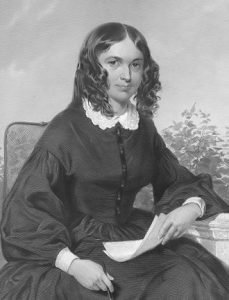 Elizabeth was born in England to a wealthy family that had obtained their wealth through plantations owned in Jamaica.

She was the eldest of 12 children.

Elizabeth struggled with undiagnosed illness throughout her life, with intense head and spinal pain and lung issues.

It could have been from a riding accident, tuberculosis, or a genetic disorder.

From an early age she took opiates for the pain, which may have contributed to her frail health,

but also to her vivid imagination which inspired her poetry.

Because of her frailty, she was excused from many domestic duties at home

and she had the time to become self-educated and very well-read.

She spent most of her life in her room, secluded from the rest of the world,

although she did have visitors. 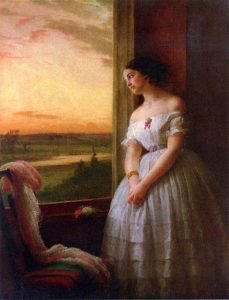 As she got older, her family and their acquaintances published her poems

and she became well-known in both England and the United States.

Inspired by her 1844 volume of “Poems” the poet Robert Browning wrote to her:

“I love your verses with all my heart, dear Miss Barrett,” 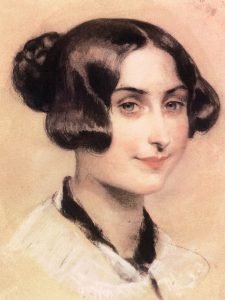 
A family friend arranged for them to meet in her rooms.

They began a secret courtship, as she knew her tyrannical and fanatically religious father would disapprove.

In May 1845, with her faithful maid, Elizabeth Wilson, and her golden cocker spaniel, Flush,

she slipped out of the London home on Wimpole street

and married Robert Browning in a private ceremony at St. Marylebone Parish Church.

They spent time in Paris and then moved to Italy,

where she lived most of the rest of her life.

Mr. Barrett disinherited Elizabeth, as he did each of his children who married.

had some money from her grandmother, so the Brownings, well respected and somewhat famous,


lived a good life in Italy. 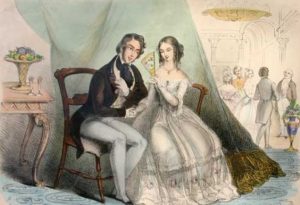 Sarah talks about this in her discussion with Bayard Taylor

Mr. Taylor and I were talking of Miss Barrett or rather Mrs. Browning and her poems yesterday. I asked him particularly about the truth of the story of her running away and getting married. Why a woman of her age and state of health – having kept her room, generally her bed, for ten years previous to her marriage should think it necessary actually to run off and get married. It seems her father is immensely wealthy and very aristocratic. He knew of their attachment, but looked upon it with such cold discouraged eye that she knew he never would consent and if he had an idea of her determined intention to marry him, he would forbid and have her watched so closely that it would be impossible for her to get away. So all things were kept very secret. One or two servants were bribed and secured her retreat. The couple went immediately to Paris; the change and excitement being of such benefit to the lady’s health that she was able to travel all through France and, I believe, other countries. They have made Italy, Florence I think, their home. Her marriage displeased her father exceedingly and he will have nothing to do with her – even returns her letters unopened. It’s now some six or seven years since her marriage.


They lived in an apartment in Florence near the Pitti Palace, called Casa Guidi.

Their only child, Robert Barrett Browning (known as Pen) was born there in 1849. 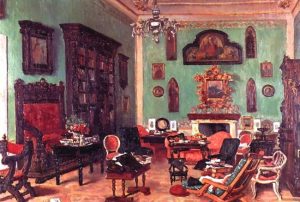 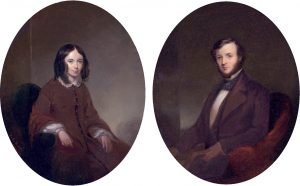 Here Elizabeth, an adoring wife and doting mother, wrote her letters and poetry.

Sonnets from the Portuguese


“Sonnets from the Portuguese”, a collection of 44 love sonnets

written by Elizabeth Barrett Browning,  was first published in 1850.

Because they are so personal, Elizabeth was hesitant to publish the poems,


but her husband Robert Browning thought they were

“the best sequence of English-language sonnets since Shakespeare’s time”.

and her admiration for the famous Portuguese poet Camoes,

they thought the title “Sonnets from the Portuguese” might make them less personal.


No one seemed to be fooled by the title. 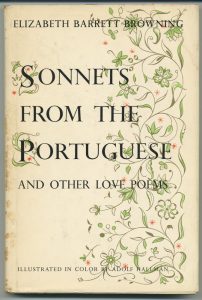 The most famous of these are Numbers 33 and 43.

Yes, call me by my pet-name! let me hear

The name I used to run at, when a child,

From innocent play, and leave the cowslips piled,

To glance up in some face that proved me dear

With the look of its eyes. I miss the clear

Fond voices, which, being drawn and reconciled

Into the music of Heaven’s undefiled,

“Sonnets from the Portuguese” is beautiful, it is her own heart’s history. The title with which she sends it forth to the world is no disguise to those who know her history. I cannot understand how a person, particularly a delicate minded female, can give her best, dearest and most private feelings to the world. I should think she would treasure them up and guard them well from the world’s eye. However, it is pleasant for her readers and I am content if she is.

How do I love thee? Let me count the ways.

I love thee to the depth and breadth and height

My soul can reach, when feeling out of sight

For the ends of Being and Ideal Grace.

I love thee to the level of everyday’s

Most quiet need, by sun and candlelight.

I love thee freely, as men strive for Right;

I love thee purely, as they turn from Praise;

I love thee with the passion put to use

In my old griefs, and with my childhood’s faith;

I love thee with a love I seemed to lose

With my lost saints,—I love thee with the breath,

Smiles, tears, of all my life!—and, if God choose,

I shall but love thee better after death.

and quest for unification, known as the Risorgimento.

She published the first part of “Casa Guidi Windows” in 1851 about the hopeful early events.

This refers to her eye-witness view of history from the windows of her Casa Guidi apartment.

The Unification was to be a long and painful process, however,

and she wrote the second part three years later.

Unification did not finally occur until 1861. 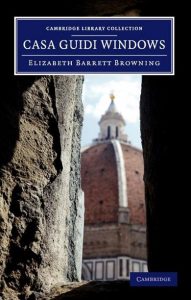 I HEARD last night a little child so singing

The same words still on notes he went in search

So high for, you concluded the upspringing

Of such a nimble bird to sky from perch

Must leave the whole bush in a tremble green,

And that the heart of Italy must beat,

While such a voice had leave to rise serene

’Twixt church and palace of a Florence street:

A little child, too, who not long had been

By mother’s finger steadied on his feet,

Read a few days ago, a volume of poems by E. Barrett Browning; liked the poem titled “Casa Guidi Widows” very much. It is very finely written, parts of it read like the very gushings of her heart.

such as women’s rights and anti-slavery.

Her Aurora Leigh, (1856) was extremely popular.

Based on her own experiences,

it tells the story of a female writer making her way in life, balancing work and love.

She was an inspiration to many social activists, such as Susan B. Anthony,

as well as other poets and writers, such as Emily Dickinson and Edgar Allan Poe. 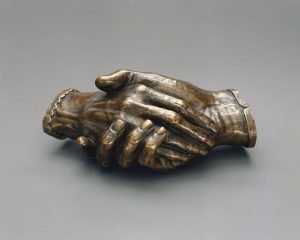