THE ATLANTIC OF LAKE ERIE

In the early morning hours of August 20, 1852, in a dense fog, the paddle steamer Atlantic collided with the Ogdensburg on Lake Erie and soon sank. Over 200 of the 500 passengers died, many of whom were Norwegian emigrants. Not speaking any English, many of them jumped overboard rather than heeding the captain’s advice to hang onto items that would float in the water, where some were rescued by the Ogdensburg. It was a frightful catastrophe.

The Atlantic made trips on Lake Erie between Buffalo, New York and Detroit, Michigan which normally took less than 17 hours. Relatively large for the time, she had 85 staterooms and a capacity of over 300 passengers. She was known for her luxurious interior. The first class state rooms were said to be decorated with gold gilding, tapestries, and carved rosewood furnishings.

On the afternoon of 19 August 1852, Atlantic left Buffalo, heading for Detroit, under the command of Captain J. Byron Pettey. Every cabin was full, and over 250 passengers were on the deck, many Norwegian and German immigrants. Atlantic stopped at Erie, Pennsylvania to pick up even more Norwegian immigrants waiting for ships to take them west to Detroit.  Atlantic was now dangerously overcrowded, with 500-600 people aboard; the ship’s clerk did not keep an exact count. Baggage was piled on the deck, and passengers stayed wherever they could, including on the uppermost hurricane deck and the roof of Atlantic‘s cabin. At 11 pm on 19 August 1852, Atlantic left Erie. The lake was calm; the sources are unclear about the level of visibility, with reports indicating everything from a light mist to a heavy fog.

Meanwhile, the new propeller steamer Ogdensburg was heading the other way, from Cleveland, Ohio to Ogdensburg, New York, carrying a load of wheat. At 2 am on 20 August 1852, the paths of the two ships crossed near Long Point. The details are unclear, but the two ships collided. Ogdensburg rammed Atlantic on the port side, forward of the paddlewheel, cutting into Atlantic‘s side down to the waterline. Ogdensburg reversed and backed away from Atlantic, while Atlantic continued away under full steam. Perhaps reassured by Atlantic steaming away, McNeil steered Ogdensburg back onto its regular course.

Many passengers on Atlantic were awakened by the collision, but the crew of Atlantic made no effort to alert all the passengers. Water flowing in through the hole in Atlantic soon flooded the boilers, bringing the ship to a halt. The passengers and crew began to panic, many throwing anything that would float over the side of the ship before jumping over the side themselves, where many drowned. An attempt was made to launch Atlantic‘s three lifeboats; one capsized, and Captain Petty suffered a concussion while lowering another, leaving him unable to provide any more assistance. The two other boats were lowered, carrying mostly crew members. The bow of Atlantic began to sink, but the stern was kept above water by air trapped inside the ship.

Meanwhile, the crew of Ogdensburg realized that Atlantic was in trouble, either because Ogdensburg‘s Captain Richardson reached that conclusion after examining the damage to his ship, or because the crew of Ogdensburg, after stopping their ship to check for damage, heard screams coming from the sinking Atlantic. Ogdensburg turned around and found the half-sunk Atlantic ten minutes later; her crew took survivors off Atlantic‘s stern and rescued others from the water. Shortly after Ogdensburg took the last survivors off of the deck of Atlantic, Atlantic sank completely.

The ship did not carry detailed passenger lists, but estimates put the loss of life at about 250, including about 68 Norwegians.

Two theories remain, either that one or both of the pilots had made a careless miscalculation, or that the collision was a result of a deliberate maneuver to injure a rival boat. In a court case brought by the owners of the Atlantic against the owners of Ogdensburg the US Supreme Court in 1856 ruled that both ships were equally to blame for the disaster.

The wreck of the Atlantic today rests in 165 feet of water on the Canadian side of the border south of Long Point, Ontario. Since shortly after the disaster the wreck has been a target for salvage operations. The most important cause of this was the Atlantic’s safe, which contained approximately $35,000 (in 1852 dollars) of American Express gold. As early as in October 1852, a diver named Green set a new depth record for diving 154 feet down to the wreck of the Atlantic. The old record was 126 feet. The safe was brought to the surface by divers in 1856, which was a feat in itself, since dives down to such depths were seen as impossible prior to the sinking of the Atlantic! 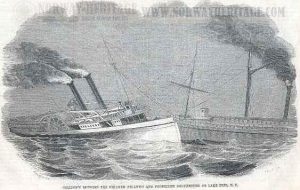